This Is the Story of tinyBuild and Their First Publishing Agreement

Back in 2011, developer Alex Nichiporchick of tinyBuild entered a contract with Buka Entertainment. After their agreement went south, Nichiporchick decided to honor the contract but warn future indie devs against the dangers of signing with such a company. Six years later, after spent speaking openly on the matter and consistently and respectfully asking for the money owed them, Nichiporchick received notice that Buka intends to sue. While he had written about the matter in the past, today, he’s offering an expansion of his letter and delivering all relevant information from the past six years in order to make sure devs don’t meet the same trials. 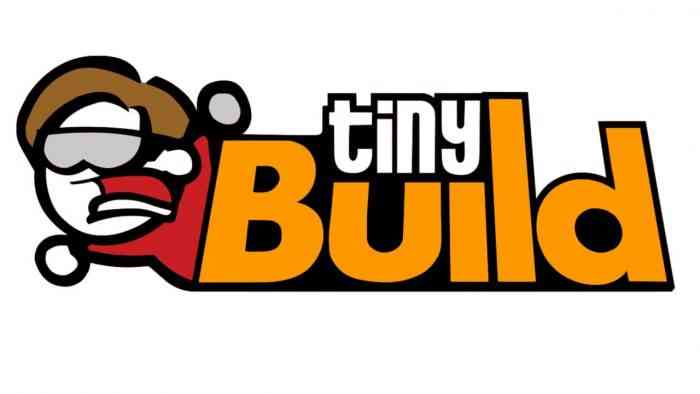 My name is Alex Nichiporchik. I’m 28. Born in Latvia during the Soviet Union. Obsessive gamer since touching the NES for the first time. You may know me as the producer behind Hello Neighbor, Punch Club, or SpeedRunners, or as the guy who called out G2A for their questionable business model. Today I speak to you as a once-22-year old aspiring indie dev with a dream to make games. This has been 6 years in the making.

I understand this whole post may come off as a long rant, so will try to keep it as factual towards the timeline as possible. The goal here is to prevent indie developers from ever getting into situations like this. Situations that kill studios and ruin lives.

From Kickstarter to Publisher Backing

Like many aspiring indie devs, Nichiporchick’s dream began on Kickstarter. It was there Buka contacted him. After a series of exchanged emails, they both came to an agreement on April 8, 2011:

“Alex, my superiors are ready to raise the advance to 17,000 euro (~$24.5k) and accept your conditions. Awaiting your thoughts”

Basically, the publisher agreed to pay tinyBuild royalties in two payments that would amount to $24.5K. Both parties signed the contracts and even exchanged forms in person. Nichiporchick invoiced Buka as requested. But, after the first payment, things got sketchy. 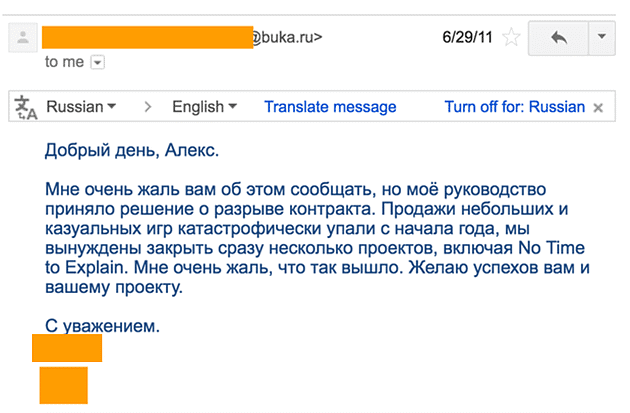 “Hello Alex. I regret to inform you, but my superiors have made the decision to terminate the contract. Sales of smaller and casual games have dropped catastrophically since the beginning of the year, we are forced to close several projects, including No Time to Explain. I am very sorry this happened. Wish you and your project good luck.”

tinyBuild’s world simply falls apart after the surprise email from Buka. This ultimately led to the huge development debacle with platformer No Time to Explain. Their project was casually dropped and, unfortunately, tinyBuild didn’t have the experience or means to take legal action against a large publishing company. Furthermore, they never even received their second payment for their work on behalf of Buka. Two years would pass before the developer could get the game on Steam Greenlight.

Then we move to recent events. It’s 2017, tinyBuild has made an honest name for themselves, and without the royalties still owed by Buka Entertainment. Nichiporchick picks up the story in Moscow where, again, he met face to face with the publisher:

A few weeks ago I noticed Buka is exhibiting at the same annual conference in Moscow where we met 6 years ago. We’re also attending. So I pinged them about the thread, trying to get them up to speed. I was met with a very defensive response. Curiously, they’ve ignored any previous attempts of contact until we became big enough to get noticed.

In response, the publisher asked for the original contract. They proved reactionary, attempting to discredit tinyBuild and Alex for everything spoken against the company over the six-year period.

“Alex, hello, I must insist that you send us a copy of the contract ASAP. At this point I am seeing your actions as unworthy PR based on lies. We are preparing counter actions.”

But the thing is, Buka couldn’t make all the records of their interactions disappear. Understandably, Nicoporchick was unwilling to cave to new threats, responding with the following:

“Instead of talking about the issue at hand, you are behaving as if I’m lying about this for 6 years now — do you want to say that you don’t have a copy of the contract?

“When we were a small developer and openly asked for help in this — your company kept silent. The only reason I’m raising this question right now is because I don’t want other smaller devs to suffer the same fate.

“If you call yourselves a publisher, you need to honor your agreements. One of our contracts was signed on a napkin. The beauty of our jurisdiction is that any document (a napkin or an e-mail) have legal weight.

“Honestly, it’s not about the 30k. It’s about the principle…”

In an email returned to Nichiporchick, they (Buka) ranted against his reports about the company during the six-year period, saying “Thing is that Buka during its 23 years of existence has never broken any of its agreements.” The problem is there’s evidence that says otherwise, and all these proceedings have helped to place the publisher’s reputation at stake. Now, Buka Entertainment is threatening to sue tinyBuild. Nichiporchick has thus responded by warning indie devs about this publisher. Even though he has done so in the past, he felt it urgent that he repeat his warnings, all things considered.