Acer Predator Delivers on Performance, Not on Weight

The advent of Ultrabooks and an emphasis on portability of the laptop required rethinking of major components for PC manufacturers, but HEAVEN FORBID any performance was lost. The Acer Predator Triton 700 is the best of both worlds, sporting a slim form factor and has a Hemi of a graphics card under the hood: the nVidia GTX 1080.

But how do you achieve both without cooking the board in its slim little chassis? Acer have to use a completely different cooling solution, adding five heat pipes and its proprietary AeroBlade 3D fan system which delivers 35 percent more airflow than competing systems, according to Acer. They also had to employ the use of a different GTX 1080 chip called the GTX 1080 Max-Q. The Max-Q chip differs from the regular version by enabling all cores, with the exception of lowered GPU stock frequencies to limit power consumption. This slows down the GTX 1080 compared to the regular model, but it does accommodate the thin notebook form factors. The only thing users have to be concerned about is the clock speed, the Max-Q still sports 8GB of GDDR5X RAM – just at a lowered frequency. 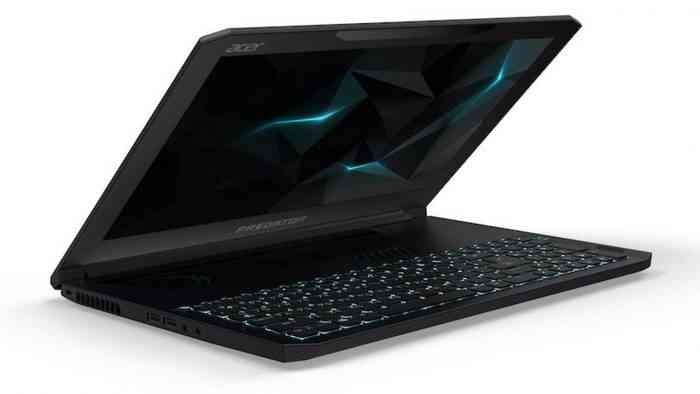 Having the GTX 1080 also makes this laptop VR ready. If you have an Oculus Rift or HTC Vive, you can just plug it in. People can watch your view on the 15.6 inch 1920 x 1080 onboard screen with nVidia’s G-sync technology.

Other notables: the CPU is an Intel Core i7, 32 GB RAM capacity, and two NVMe PCIe SSDs in RAID 0 configuration, extending your available storage by double. The keyboard is mechanical (clickity-click) and backlit, but it’s also been pushed down to make room for the touchpad, which is a Gorilla Glass SR plate. The touchpad supports gestures like pinch-zoom and is overall quick to respond.

All of this is contained within a 5.7-pound, .74-inch thick frame. Now you won’t hurt your back lugging this to your next LAN party. The starting retail price will be $2,999 when the Triton 700 drops in August.