2K yesterday confirmed WWE Superstars John Cena and Sasha Banks, as well as WWE Hall of Famer Ultimate Warrior, as the next three roster members in WWE 2K17, the forthcoming release in the flagship WWE video game franchise. The announcement was made via the WWE 2K17 roster E3 painting that was completed yesterday.

Throughout E3 2016, 2K partnered with WWE portrait artist Rob Schamberger to reveal the three roster additions at the Company’s South Hall booth by painting them on a sizable canvas in a live setting.

E3 attendees checked in throughout the show, as well as on Facebook, Twitter and Instagram, to see if their favorite WWE Superstars and Legends officially joined what’s expected to be a substantial WWE 2K17 playable roster. 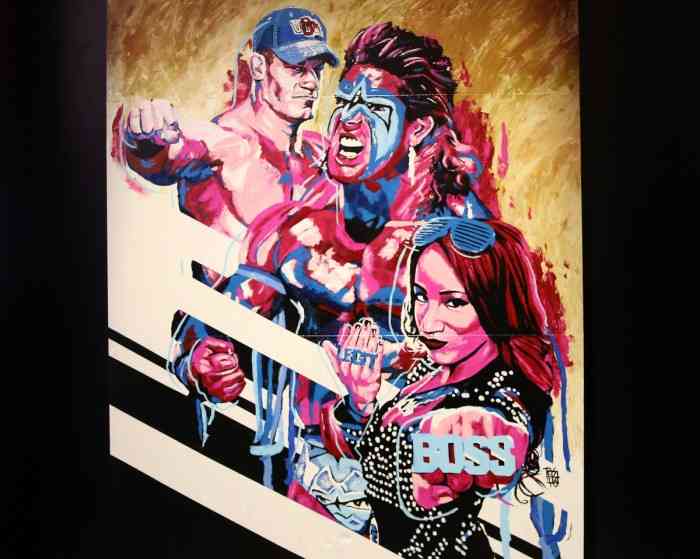 A Kansas City native, Schamberger’s portraits of WWE Superstars – both past and present – have made him a sought after staple in the WWE Universe. His unique artwork has raised money for several charities, including the Make-a-Wish Foundation, and is available for sale to the public through WWE Auction (originals) and WWE Shop (shirts and prints). Schamberger is often seen painting live at various WWE events, including WrestleMania Axxess, SummerSlam and Monday Night Raw, as well as through the popular WWE weekly painting series on YouTube, Canvas 2 Canvas. In addition, his art has seen display at several national museums and galleries, adorns the walls of many WWE Superstar homes and can be found in the hallways of WWE’s Stamford, Conn. headquarters.

Wrestling Fans Get Ready To Rumble, AEW Is Aiming High With Upcoming Game
Next
The Hottest Amazon PS4, Xbox One, and PC Gaming Deals, Jun. 17 – 19
Previous
The Secret World: Create Your Own British Museum of the Occult