The Wait is Nearly Over as DOOM Arrives this May

Bethesda has finally given us an official release date for its much anticipated, DOOM. Fans can look forward to playing it all across the board on their PC, PS4 and Xbox One on May 13th. Hell yes.

Also announced, unsurprisingly really, is the DOOM: Premium Collector’s Edition as well as pre-order goodies as is the standard these days. The collector’s edition doesn’t come cheap of course, a whopping $119.99 USD, but it’s pretty badass if you’re a serious DOOM fan. The collector’s edition includes a 12-inch tall statue of the Revenant demon which, according to the press release, is modeled from actual in-game 3D files. The statue is mounted on an LED-lit base with internal, slow-spinning turbine from the UAC facility on Mars. Really guys, FROM MARS. The collector’s edition also includes a copy of the game (naturally) and comes in a ‘battle worthy metal case’ in case you ever take your game to war… on an alien planet. 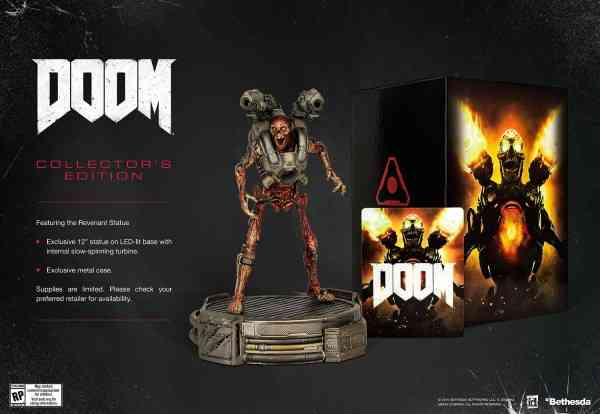 Pre-ordering either the collector’s or the standard editions of Doom entitles players to the Demon Multiplayer Pack, which containsa unique demon armor set with three skin variations, six metallic paint colors, as well as three Id logos players can apply to their weapons and armor.

The pre-order bonuses also include six Hack Modules, which are one-time consumable items that can give you an edge in a multiplayer match.