Considered by critics to be the all-time genre-leading coaster park simulation game, RollerCoaster Tycoon 3 is a bestselling PC classic, now available for iPhone and iPad as it was always intended without in-app purchases or free to play functions.

RollerCoaster Tycoon 3 brings all the fun of running your own rollercoaster park to iOS, with new touch-friendly controls and an all-new modernized user interface. Players can sculpt organic landscapes and reshape the world with a touch, personalizing parks with paths, shops, scenery, rides, twisting rollercoasters and more, all in stunning 3D.

RollerCoaster Tycoon 3 for iOS features all 18 scenarios from the original PC game, five park themes, 100 pre-built rollercoasters, the fully-featured rollercoaster creator, and the complete original sandbox mode where creativity can run wild. An in-depth management simulation drives the performance of the park, as players thrill guests with rides and entertainment, earning money to dream and build even bigger. 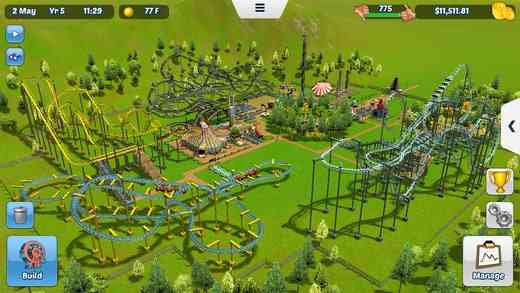 RollerCoaster Tycoon 3 is developed and published by Frontier Developments, developers of the upcoming Planet Coaster. Planet Coaster is an all-new game that embodies the spirit of the classic ‘Tycoon’ titles, launching in 2016 for PC and available now to preorder. Planet Coaster is the new destination for everyone who cares about coaster parks and management sims.