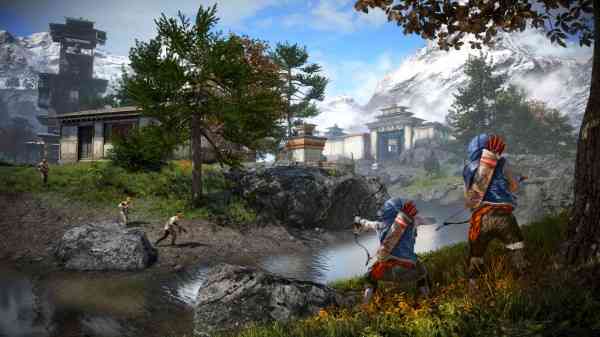 In this new content for Far Cry 4, as the ongoing war over Kyrat continues, players will embody the Rakshasa and the Golden Path to hold point-scoring locations in the battle map.  Overrun includes:

•             New PvP mode: Throughout the match, three designated locations will activate with only one location active at a time. Both factions compete to control the active zone and score points.  The more team members a faction has in the zone at a time, the more points they score.  Overrun plays in two rounds, and scores are totalled to determine the overall match winner.

•             Four new maps: Maps have been specifically crafted to support the tactical yet frenetic gameplay of Overrun.  Each map offers a perfect balance of power between the Rakshasa and the Golden Path.

•             New vehicle: To help even the score, the Golden Path have brought another vehicle into the mix.  The iconic dune buggy is now playable in this new PvP mode, giving the Golden Path a combination of speed and power to help dominate the fields of Overrun!

Overrun is available as part of the Far Cry 4 Season Pass or can be purchased separately. The Season Pass includes Overrun as well as The Syringe, Escape from Durgesh Prison, the Hurk Deluxe Pack, already available, and Valley of the Yetis, available soon.

Players can purchase the Far Cry 4 Season Pass through the following links:

The Map Editor is Buffing Up for Co-Op

The Far Cry 4 Map Editor is getting bigger and now allows all maps created to be playable in co-op. This highly anticipated feature will allow players to enjoy the Far Cry 4 co-op experience in their own custom environments.

The Map Editor is an incredibly powerful tool that lets players create, play and share their own unique challenges. Using assets from the world of Far Cry 4, players will be able to add everything, from vehicles to elephants to AI soldiers or weapons and even a golden effigy of Pagan Min. Today players can become developers and let the world experience their vision.