With a name like Coffin Dodgers one would expect the type of laughs the game will invoke but if you’re like me and enjoy that tongue-in-cheek humour then that’s not necessarily a bad thing, it’s the gameplay and graphics which bog down the overall experience. Whether we like it or not, amazing kart racers like Mario Kart and Diddy Kong Racing have set the bar for this type of genre which means in order to bring the heat you need to find ways to innovate or do something new. Coffin Dodgers fails to deliver that hard hitting kart racing experience but manages to wrap it all up in a comedic premise with ridiculous characters to make it tolerable enough to play through.

Beginning with the story, the reason why you’re beefing up your turbo-jet scooter to race your fellow seniors is Death visits the retirement village of Sunny Pines threatening to take everyone’s souls in three days. The town of elderly gather for a meeting and decide they’re too young to die so they challenge Death to a mobility scooter race, to which he accepts. The story really shines with humour, while the entire game is essentially a collection of elderly wisecracks, they are funny and it fits well with the overall theme. It’s light hearted and the game never takes itself too seriously.

“The story really shines with humour, while the entire game is essentially a collection of elderly wisecracks, they are funny and it fits well with the overall theme.”

Coffin Dodgers plays like how you would expect a typical kart racer to play but a more bare bones version, there are limited amounts of weapons and they aren’t the most creative of choices either; use an oil slick to make the road slippery, a fan to give you a speed boost, a shield for protection and an uzi, defibrillator and fireworks to knock down opponents. While we’ve seen these all before there’s also a melee attack that can be charged to knock racers off their scooters, this is a nice touch that feels much like Road Rash 3D (except with grandpa).There’s a nice array of options to upgrade and improve your scooter, change the colour or drop a new engine to increase your top speed. This becomes a crucial part of the game as you progress through story mode.

There’s the standard game modes like Time Trial but my biggest gripe is the lack of online multiplayer — while there’s split screen capabilities, not having a dedicated matchmaking system for multiplayer, in this day and age, is disappointing because it could have been a blast to race against five other friends. Aside from that, story mode is the strong point in Coffin Dodgers, choose your character and race against Death, the last place racer becomes his next victim so it adds that feeling of urgency to win. The opponents who become his victim return to race as a zombie. In order to stay alive, you have to equip your kart with new engines, frames and cosmetics to have you win in style. 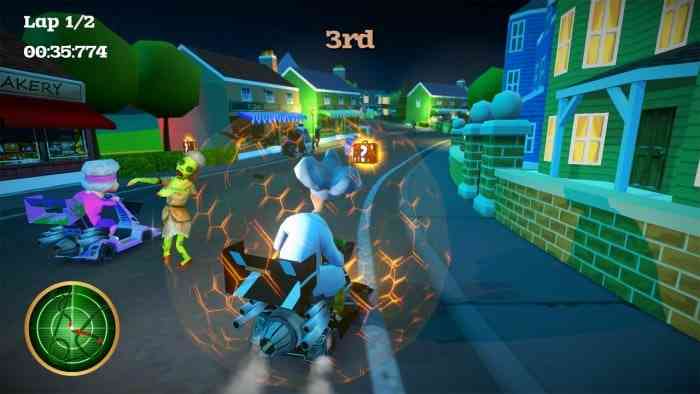 Open World mode gives you the freedom to drive around the town at your leisure, the problem is, there’s nothing to do but drive around aimlessly, the town doesn’t offer any activities to do. To be fair, there’s also Crazy Granddad mode which can only be played in open world and it’s similar to Crazy Taxi for Dreamcast; rush to retrieve items spawned around the map to put in your basket until the clock runs out — I couldn’t find very much replay value from this because it became monotonous after about the third round.

Now let’s mosey on over to the graphics department and what a messy department indeed. The graphics are crushingly bland, environments try to be whacky and cartoonish with UFOs and zombies roaming the streets but the awful textures and blocky structures make it feel like a dated port of an N64 game and I often found the graphics to dip during races which threw me out of 1st place on several occasions.

“Overall, Coffin Dodgers isn’t the worst kart racing game but it doesn’t reinvent the wheel either.”

Overall, Coffin Dodgers isn’t the worst kart racing game but it doesn’t reinvent the wheel either. The graphics need TLC and the lack of online sucks a lot of the replay value out but it does handle well as a standard kart racer. The story is hilarious and the customization adds a layer of incentive to keep playing. Is it worth picking up? I’m going to say a soft yes, if you have a friend to go split screen even better but it’s not going to blow you away. 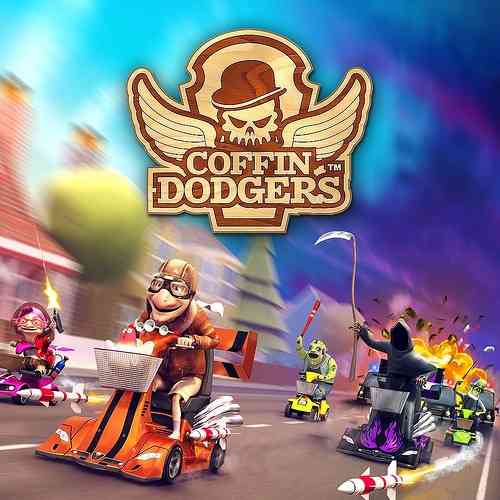