I grew up during the age of PC gaming when point-and-click adventure games were plentiful. I could always count on them to take me to far-away places of mystery and adventure in humorous and dramatic ways. Among my favourites were the Monkey Island series, Maniac Mansion, Zak Mckracken and the Alien Mindbenders, and the King’s Quest series. So when The Book of Unwritten Tales 2 from KING Art Games dropped into my lap, it brought a smile to my face to see that this genre is still alive – but would the game live up to the best of the games I played in the past, or would it just be a pale shade of them?

The story of The Book of Unwritten Tales 2 is centred on a group of adventurers reuniting after the events of the first game. They’ve come back together to combat a curse that has fallen on their land, and in the process are trying to solve the mystery of how one of the main characters has become pregnant. Once again, you control Nate (a human), Ivo (an elven princess whose parents are trying to marry her off to a prince who she has never met), Wilbur (a gnome mage who is still trying to learn the ways of magic), and finally, a strange alien-like critter. Having never played the first game in the series, I really didn’t know much about the characters or their backstories, but the game makes you dive right into things. 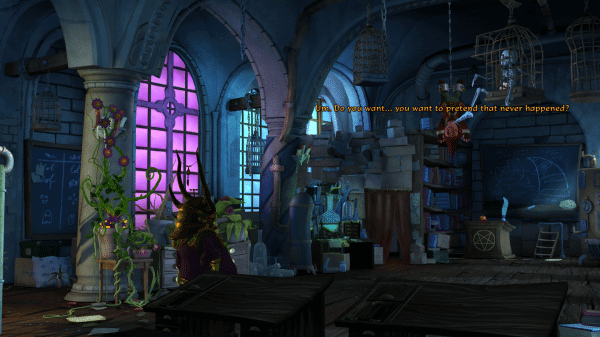 Gameplay is of the familiar point-and-click variety – simply click on the screen where you want your character to go or interact with. The game has a tutorial built into the opening that will show you the basics, which was rather entertaining as the credits roll. During your adventure you will click on items found around you, some of which you can pick up, and others that you can just interact with. Items you pick up will be deposited into your backpack, and can be clicked on again when you open it – this allows you to then click on something else with which you want to try to use the item with, to try to advance the storyline.

You will come across things that look like you should be able to get, but you won’t be able to until you have talked to a certain person or do something else. I also found you will do a bit of backtracking to talk to folks to advance the storyline, which is nothing new for the genre, but some might find this tedious. Personally I didn’t because it always made sense to go back to that certain person to ask what to do. If you do get stuck and aren’t sure how to progress, the developers have added a hint function: you can press the space-bar to highlight items you can interact with. This came in handy a few times.

Interacting with various people and creatures in the game was a treat because everything is very well written, and the humor they used should appeal to a wide range of audiences. Conversations are built around dialog trees, so sometimes there is a bit of trial-and-error to get a character to do something or give you a specific item you need. Also, after picking up a specific item, or completing certain goals, a character may have a completely different dialog tree open up, so I recommend talking to people often. You never know what you might discover. 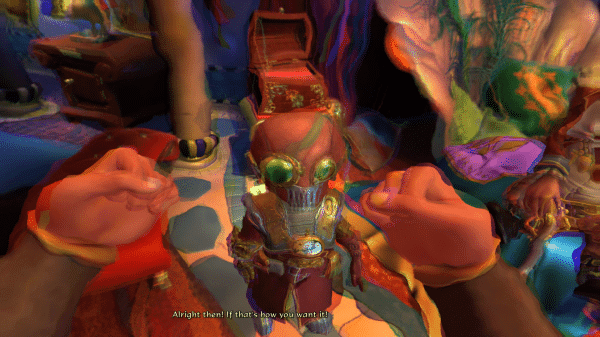 All I have to say about the overall look of the game is that it is absolutely beautiful. From the bright, colourful and lively settings where the game takes place, to the well-animated characters, this game is pure eye candy. There is so much to see and take in – I found myself just relaxing at times enjoying the scenery. What I really liked is that the developers seem to like to add callbacks to other popular games. For example, in the beginning you come across a group of swords that are clearly inspired from other games and pop culture. This really had me amused and I always kept an eye out for other references in the world. Characters that you use and interact with in the game seem to have a life of their own. You can definitely tell some time and effort was put into each one of them. I struggled to find any flaws at all, but the only thing that really came up was that when wanting to use an item out of your backpack, the backpack can sometimes get in the way with the object you want to use in the background if your character is positioned too close to it.

You won’t be impressed only by the game’s graphics, but the audio as well. When you first start the game you will be met with large orchestrated tunes and sweet melodies that almost seem they could have come from a Disney animated movie. Voice acting also surprised me, with how well the actors handled their lines. They read them like they actually cared about the person they were playing – and they did it very well. I’ve heard bad voice acting in the past, but this is not the case here. You will not be disappointed or turned off by it.

When it comes down to it, this is a must-play game for those who enjoy adventure games of this style – but it definitely sticks to the tried-and-true point n’ click genre. It is very well produced and shows a lot of care behind it. I do recommend playing the first game in the series to get a bit more familiar with the characters, but that does not hurt the game, you will still enjoy it either way. I personally plan to go back and find the first game and see what I missed in the characters’ previous adventures!

Next Harold Review – Gorgeous Platformer With A Steep Learning Curve
Previous The Order: 1886 Review – Too Short? Too Linear? So What? Ready at Dawn Delivers a PS4 Must Have