When I reviewed the base game for The Elder Scrolls Online: Tamriel Unlimited upon its first release back in 2015, I gave it high marks as much for the potential that it offered as anything; Tamriel is a massive place that, as I foresaw then, is now growing to truly epic size with the original game’s subsequent DLC expansions. Imperial City opened up the capital and its subterranean secrets; Orsinium pulled us into the mountain power-struggles of the Orcs. And now comes the latest DLC, Thieves Guild, which adds yet another area for us to explore, and new adventures to embark upon. For some, it also offers the chance to live their fantasy – to live the life of the master criminal, sneaking, cheating and stealing all from the comfort of their living room, without the threat of those pesky police. Is Thieves Guild worth the purchase? Well, at the $25 price, I wouldn’t go so far as to say it’s a steal; but if you’re someone who has been playing ESO:TU for a while and is looking for something a bit new and different, then Thieves Guild might be the DLC you’ve been looking for.

You begin Thieves Guild in the same way as you did for the other DLC expansions. You travel to a newly-opened area, Hew’s Bane, which is a peninsula of Hammerfell, in the Southwest corner of Tamriel. Fast-travel via the waypoint shrines to Abah’s Landing, a city in Hew’s Bane. It is the home of the legendary Thieves Guild, and it is here that you will start the main quest for the DLC. As soon as you arrive in Abah’s Landing, you will meet the NPC who will get you started – Quen, who tells you that she needs someone for an important job. From there you are off on your new life as a stealthy denizen of Tamriel’s shadowy underworld.

If you came to do some sneakin,’ Thieves Guild will give you what you are looking for. The main quest is pretty large and well written, and has you joining the Thieves Guild to help save it. There is an epic and interesting storyline that has intrigue, betrayal and plot twists aplenty to keep you interested for hours. Thematically, it reminded me a lot of the “Trinity Restored” Nightingales quest in Skyrim, but here you are going to do a lot more stealth-based activities, along the lines of Assassin’s Creed or even Metal Gear Solid. If you loved those games, you will be right in your element with Thieves Guild. And I was very happy to learn that this DLC, like Orsinium, is scaled to your level, so no need to worry about being a high-level character to complete this quest.

“Thieves Guild offers a lot of unexpected fun in the simple rush you get in breaking into “forbidden” places, and pilfering items without being caught.”

And if thieving has not been your forte up until now playing ESO:TU, you also don’t have to be worried, because Thieves Guild will actually help to improve these skills as you play. A new passive skill line comes with the DLC when you join the Thieves Guild, and you will use these new skills to help you in your questing. For example, you can pick up a skill to help you escape more easily if the law is after you, by lowering your Bounty. Now, I will admit, stealth has never been my particular cup of tea when playing ESO:TU so far. I mean, I play RPGs because I want to be a badass warrior, or powerful wizard – I have never fantasized about living the sketchy life of a sneaky pickpocket. But I liked the way that Thieves Guild actually made me appreciate the stealth aspect more, and helped me get better at it. I can actually say that, after playing this DLC, I will use stealth more in the rest of the game as well.

Thieves Guild offers a lot of unexpected fun in the simple rush you get in breaking into “forbidden” places, and pilfering items without being caught. This was a nice break from the combat-heavy grinding experience of ESO:TU I have had so far. This DLC almost feels like a different game, set within the world of Tamriel. The excitement is somewhat dulled, however, by the bland nature of some of your missions – as we have seen with a lot of previous Elder Scrolls RPG questlines, you are doing a lot of errand-running in Thieves Guild. Overall, the gameplay in Thieves Guild adds excitement to the usual experience of ESO:TU, and that will be a welcome addition to anyone who has begun to tire of the base game. 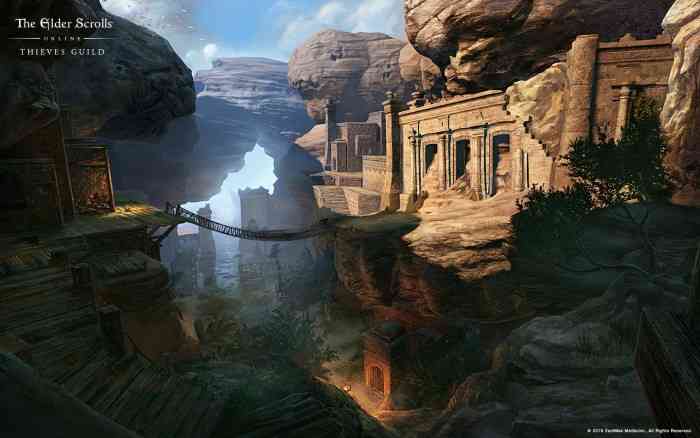 Stealth is marred a little bit by some technical blips. One thing that I found challenging at times was the imprecise nature of NPC detection. You are sometimes challenged to complete missions without being detected, especially by guards; but I found that I was detected at times by NPCs even when they could not see or hear me. Other times, I could sneak past them even when they should have detected me. It didn’t happen too often, but I found that completing missions without being caught was a bit hit-and-miss at times. Things can also get a bit stutter-y when lots of human players are in your area – I am sure this will be ironed out quickly though, and it was never a serious issue.

Aside from the main quest, there is a lot more stuff to keep you busy in Thieves Guild. Abah’s Landing is a decent-sized town with a desert-aesthetic offering lots of side-activities to keep you busy for hours. There are missions you can do for the Thieves Guild that will take you all around Hammerfell and even Tamriel itself; you will pickpocket certain targets, fetch important items, open locked boxes and a bunch of other activities that will have you feeling like a genuine smooth criminal. Although the physical area of the DLC is not the biggest I have seen, it is packed with things to do and feels very full. Thieves Guild’s price of $25 might be a bit expensive for some players’ tastes, but at least it tries to give you your money’s worth. Also among the extras are two new delves, Bahraha’s Gloom and Shark’s Teeth Grotto, bringing you new challenges and rewards. And those rewards include a lot of new loot; I recommend that you clear out your inventory before starting the Thieves Guild DLC, because you will soon run out of room for all the cool stuff you find. There are new item sets, and loot seemingly in every chest and urn. And in Thieves Guild, you have access to new Fences who help you get rid of that hot property quickly and easily.

For those who like to play in groups, Thieves Guild offers a new 12-person Trial, called The Maw of Lorkhaj. Although I am not one for group play normally, I liked the way this Trial scales to your level, just like the rest of the DLC. There is much reward to be gained by joining up with a stronger ally and trying this one out. You can also apparently take advantage of new crafting techniques; but I confess, I haven’t really gotten into crafting just yet, so I cannot comment on how cool this part is. Finally, there is more content to check out – including new Bosses and plentiful Heist challenges. Heists are refreshed daily, so there is lots of replayability potential to entice you into coming back to Abah’s Landing again and again. Thieves Guild has enough new content to keep you busy skulking around through Hammerfell for a long time indeed.

Overall, Thieves Guild offers a new and fresh experience for players of The Elder Scrolls Online: Tamriel Unlimited. Like the other DLC we have seen so far, its price of $25 (3,000 ESO Store Crowns) is a bit expensive, being half the cost of many full games these days. But with that high cost, Thieves Guild does its best to give you a lot for your dollar, and there is hours of playtime in just the main quest alone. I recommend Thieves Guild to anyone who has been playing ESO:TU for a while and has grown tired of combat and grinding. This DLC feels in some ways like a new, different game set within the base world. You can now try to explore and develop your sneaking, stealth and thievery skills, all while engaging in a pretty fun main storyline. Criminal behaviour might be wrong, but in Thieves Guild, it just feels so right.