Tharsis Review – This Dangerous Game of Yahtzee Can Lead to Cannibalism

Developer Choice Provisions is best known for their series of rhythm games under the Bit.Trip banner, so it might be a surprise to find out that their latest project is a highly difficult strategy game. Called Tharsis, the game has players attempting to commandeer a spaceship, called the Iktomi, to Mars. Things don’t go very well on this historic flight, as everything starts to go wrong 10 weeks out from their arrival.

To successfully land on Mars, players will have to micromanage each of the four crew members aboard the Iktomi. Different sections of the ship will start  malfunctioning during the trip, and it’s up to players to fix them before the ship explodes. What is most unique about Tharsis is how the repair process unfolds. Players won’t be using their quick reflexes, instead they’ll be rolling dice to decide their fates.

Each individual crew member has a number of die available to them. This number either increases or decreases depending on how well fed they are. It’s important to keep this number as high as possible, as each die can be the difference between fixing a section and taking vital damage to the ship. While ultimately the results are random, players will want to send shipmates with a large number of dice to highly damaged areas to have the best chance of repair.

“Risk and reward is in full effect in Tharsis, and I found myself holding my breath with every roll.”

During the repair process, you have a number of ways to influence what happens. Each character has a certain number of re-rolls, and players can choose to hold dice if they get a low roll. Each roll is a risk, though, as sometimes players will take damage (or lose a die completely) if they roll a certain number. There are ways to circumvent these negative effects by using assist items, but you’re rarely well stocked with items. Risk and reward is in full effect in Tharsis, and I found myself holding my breath with every roll.

After every turn (which lasts an in-game week), the player will have to choose between two different options on how the crew should go about this botched expedition. All choices have negatives and positives, so it’s important to choose which one suits your need as a crew. Are you willing to let your ship take damage in order to get food, or would you rather every crew member take damage in order to get an extra die. Tharsis constantly presents you with tough dilemmas to figure out, and to complicate matters further those that you don’t side with will be stressed out. 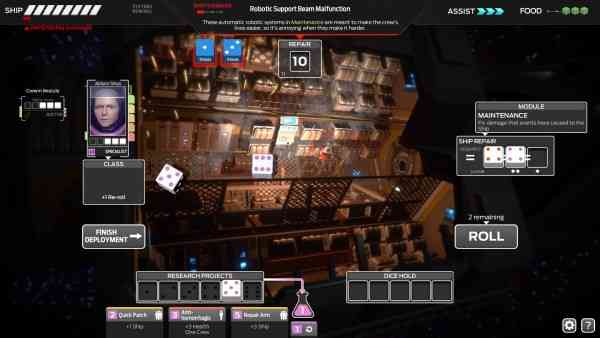 There are a lot of systems in play in Tharsis, and managing them all at once is the greatest challenge in the game. Each character has their own stress levels, health meters, and die counters to monitor. Occasionally, things will take a turn for the worst, and players can choose to resort to cannibalism in order to survive. Choice Provisions makes the choice stick with the player, as anyone who eats human meat will have blood-soaked dice every time they attempt a roll. It’s a sobering reminder of what each player sacrificed during this mission.

A successful run will require both strategic ingenuity, and plenty of luck. No matter how long you play the game, or how good you get at it, you’re ultimately tied to the results of your dice rolls. The randomness that is built into the game can be frustrating at times, especially when it isn’t going your way, but there is a certain magic when the stars align and you roll a 6 at a desperate moment.

“From its toying with morality to the pure ecstasy it provides when defying the odds and having a successful flight, there really isn’t anything else like it.”

Tharsis offers up two different difficulty options (normal and hard), but considering how difficult each one is it could’ve used an easy difficulty. The game is fast-paced (a successful run only takes around 15 minutes), but the lack of initial success will surely rub some players the wrong way. As you learn the ropes, you’ll end up dying a number of times. Don’t be surprised if you don’t have a successful run until after dozens of deaths.

These deaths won’t be for naught, however, as you are constantly making progress to unlock new crew members to use. Considering each crew member has their own skill set, this is a huge game changer. Initially, there are only four different classes available, but players can unlock five more by accomplishing certain in-game goals (such as making 2,800 repairs). Once you are able to send out different squads, it makes the game much more interesting, and adds a lot of replayability to Tharsis.

While its random elements will surely turn some gamers off, there is a lot to like about Tharsis. From its toying with morality to the pure ecstasy it provides when defying the odds and having a successful flight, there really isn’t anything else like it. If you’re willing to overcome a substantial learning curve, then you’ll your haphazard trip to Mars. 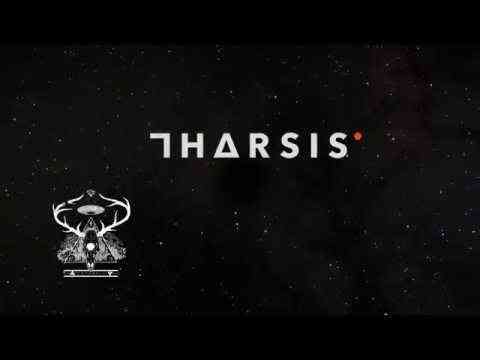 Daedalic Entertainment Launches Blackguards 2 on Nintendo Switch
Next WWE 2K16 Legends Pack & Terminator DLC Review – Legends Pack is Fire, Terminator Not So Much
Previous The Sims 4: Get Together Review – AKA: The Sims Go Clubbing