The Xbox 360 was an indie developer’s delight as so many small studios made their home console debut on it.  As the next-gen consoles were announced in 2013, it seemed that Sony was going to be the place to publish indie titles, but Microsoft had a program that was not announced until later, and that program is ID@Xbox.  Since then indie studios have been announced and anticipation for smaller games has risen, and now Xbox One fans finally have their first indie title published under the program.  Strike Suit Zero: Directors Cut is now available on the Xbox One Marketplace and we have our thoughts of this next-gen port that was released on PC last year.

There is a story to go along with your space combat fix, but alas it’s one that you’ll most likely not pay too much attention to.  The opening cut-scene sets the tone for why there is a war to be fought, and the first level, a training level of sorts, introduces you to you are and why you are there.  In a nutshell, you take on the role of a space pilot who has been put back into active duty after having a mental breakdown of sorts resulting in a loss of memory.  You help the fleet search for relic.  As the game progresses you’ll find that you won’t care about the background narrative though as the game is really all about flying amongst the stars shooting at copious amounts of bad guys. 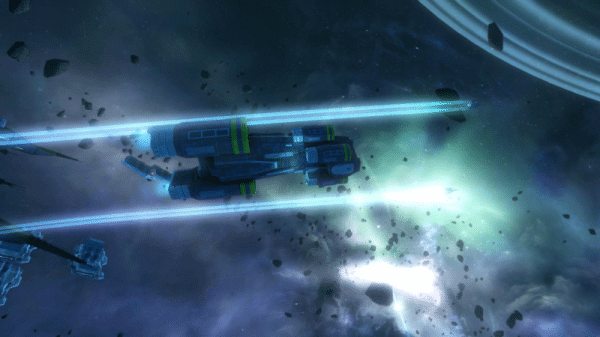 Given the space combat theme, one thing that has to be right for this game to remotely succeed is the control, and I am happy to say that the control is pretty good.  There are three preset configurations for you to choose from, and each one is quite adaptable for any gamer.  You’ll find that flying, dodging, rolling, targeting, shooting and pulling off defensive maneuvers is more the doable using the Xbox One controller.  I am sure the diehards out there may complain about the lack of a customizable setting, but overall you should find a control scheme that meets your need.

One of Strike Suit Zero’s features that make it really neat is the fact that early on in the game you get the chance to turn your ship into…wait for it…a Gundam like mech fighter.  Did you see that coming?  In order to transfer your Strike Suit into a bad-ass mech you must defeat a certain number of enemies which in turns builds up your Flux energy bar, and once full you are free to unleash mechanized doom.    As you fight in mech form your Flux meter will start to diminish and once depleted your Strike Suit enters spaceship form once again.  I have to say that my most fun was indeed as a mech.  The ability to move with grace and open up a can of “whoop-ass” as I made virtual tin cans out of my foes was most enjoyable.  I truly believe that Born Ready did a great job with the implantation of the mechs and I think you will too.

There are a total of 18 missions (13 original and 5 additional ones that were as DLC on the PC called Heroes of the Fleet Campaign) and you’ll find yourself flying through the game (pun intended) in about 7-9 hours depending on how skilled you are and what skill level you play on.  I played on normal and I have to say that I found more than a few times where I met an untimely death.  This game is not easy, and I am sure many will struggle now and then.  Don’t get me wrong, it’s beatable, but I found a few times when I wanted to throw my controller.  To ease the pain of your ships virtual death there are checkpoints throughout, but I have to say that their timeliness was quite strange.  At times I found myself going way back in a level that took a lot of time to get where I died, while other times I pretty much started exactly where I met my demise.  Regardless, I am just happy there were checkpoints to begin with. 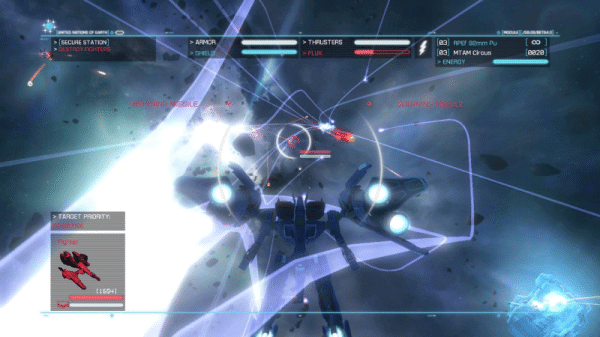 As I found myself making my way through the game’s missions one thing really struck me, and I was a bit disappointed by it.  It was the fact that the missions started to feel somewhat repetitive.  Most missions can be narrowed down to escorting and protecting fleet vessels, as well as battling those that wish to do you harm.  It’s pretty simple when you think about it.  In many ways this is one of my greatest complaints with Strike Suit Zero, as there really isn’t as much variety as I hoped for in what I had to do.  Sure, there is the a variety in ships and Strike Suits, but the missions themselves are not as varied and some of them can feel like they carry on forever as a result.

Presention wise Strike Suit Zero gets the job done fairly well.  Visually, it isn’t that bad looking of a game, but doesn’t push the Xbox One’s hardware either.  Regardless, the weightless environment of outer space looks pretty good.  From gas filled nebulas to the planets you do battle over, it looks fairly convincing.  Ships look somewhat futuristic and your Gundam-like mech looks pretty badass too.  The in-game HUD is also informative and easy to get a grasp of reading.  Technically speaking I found little problems.  I did note the odd bout of slowdown now and then, especially when some pretty large ships explode while things get crazy on screen but it didn’t ruin the experience.  Other then that I really don’t think there is anything to complain about here.  As for the sound, it manages to wrap everything up.  With a musical score that borders on symphonic with a mix of synthesizers you’ll find that it mixes well with the on-screen action.  Sound effects manage to convey the chaos of space battle well with lots of lasers, thrusters and explosions making up the sound of the action while the voice acting, which takes place before, during, and after battle is more than passable.

While not perfect Strike Suit Zero: Director’s Cut is not a bad game at all.  Although it can get tough, and can seem repetitive at times, there are far worse games out there.  Those who are fans of space combat games (e.g. Homeworld, Wing Commander or X-Wing) can do no harm by checking out this game on the Xbox One, and those who haven’t delved into the world of space combat to date should take a close look at this title too, as there is some fun to be had.  Overall it’s not a bad way to kick off the ID@Xbox program and I look forward to more games coming.