Virtual reality gaming is still in its infancy, but so far, the impressive technology has been defined by indie offerings. Few major publishers have released one major title, let alone several, for the exciting new devices. The exception has been Ubisoft, whose habit of supporting new hardware is alive and well. The French publisher has put out some of the best games for the medium, including the fantastic Eagle Flight, and have now released their most ambitious game yet—Star Trek: Bridge Crew.

The premise behind the game is one that will immediately intrigue any fan of Gene Roddenberry’s monumental sci-fi series, as it allows players to operate a space ship. This is a team effort, as the bridge is separated into four different roles: the captain, engineer, helmsman and tactical. With each position comes different responsibilities (such as the helmsman piloting the ship) that must be accomplished in order for the ship to run correctly. The actual interactions are simple, as players use PlayStation Move controllers to mimic their arms, and then choose what buttons they want to press on the monitor in front of them.

Like the iOS hit Spaceteam, this results in a co-op focused experience that relies on proper communication. As a natural leader (it’s even on my résumé), I spent most of my time as the ship’s captain. This gave me access to an objective list that only I could see, and it was up to me to make sure the team was working together in unison. So, if the game wanted my team to warp from one part of space to another area so we could fix a damaged ally, I had to tell my helmsman what direction to point the ship in. If an enemy ship was attacking, it was on me to make the tough decision to either fight it out or evade combat. Every small task in the game requires cooperation, and this leads to some memorable exchanges. 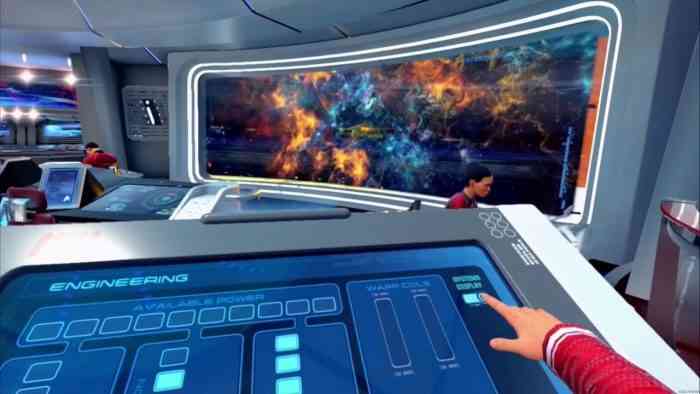 The gameplay eventually becomes the backdrop of something much more interesting, which is getting to watch people interact. I haven’t used voice chat in a multiplayer game this much in years, and it was refreshing to spend an online experience laughing with others as we either accomplished or failed our goals, rather than muting a Call of Duty lobby filled with vulgarity. Maybe it’s due to VR’s smaller install base, and that the only people who can afford expensive headsets tend to be working adults, but I rarely have had such a positive experience online. It also helped that the game didn’t just encourage us to work together, but demanded it. That’s not to say that there weren’t bumps in the road, as frantic sequences often resulted in some yelling between players, but I was lucky enough to never run into someone that took the game overly serious. After all, our real lives weren’t in danger if we did poorly, just our virtual caricatures.

Star Trek: Bridge Crew can also be played solo, and while I feel like this is clearly an inferior experience, it’s still a pretty good time. I mostly did this when I was getting up to speed with the gameplay, as it allowed me to switch from the captain’s chair to any of the other positions. This allowed me to better understand each of the character’s specific tasks, and choosing to do everything by yourself shows how helpful your teammates are when playing online. Still, nothing beats playing with other players, and I lost all desire to play by myself as soon as I hopped online.

“Star Trek: Bridge Crew feels like the next step for cooperative gaming.”

One of the coolest parts about Bridge Crew is that the player does have some agency over how a mission plays out. It doesn’t mirror the television series that inspired it, as you won’t be talking your way out of potential conflicts, but my actions impacted how missions played out. One of the most memorable moments I had was actually an act of cowardice, as I commanded my crew to immediately warp out of an area after a Klingon ship threatened to fire upon us if we stayed in the area. This meant that my crew was unable to save some stranded allies, but by taking my ball and going home, I was able to ensure my crew’s safety. I didn’t feel good about this decision, but I was able to make a few trophies pop due to my pacifist ways. In the end, it was a worthy sacrifice.

It’s a good thing that missions have variations to them, as there isn’t a ton of content here. There’s only a handful of missions for the core campaign, and there’s not a great story to go with it, so them being replayable is a big deal. Beyond these structured levels, players can also go on “ongoing voyages,” which are randomized missions that fall into a few different categories (rescue, defend, etc.). Since the objectives are always secondary to the interaction between teammates, there is just enough content to keep Star Trek: Bridge Crew feeling fresh enough to warrant regular sessions. Players can even choose to use the USS Enterprise, the ship from the original show, on these missions, which makes even the smallest of adjustments a process of clicking a ton of different knobs and buttons. It was simply too complex for me to deal with, but it’s something I’ll try to figure out if Bridge Crew ever becomes too easy for my regular playing group. 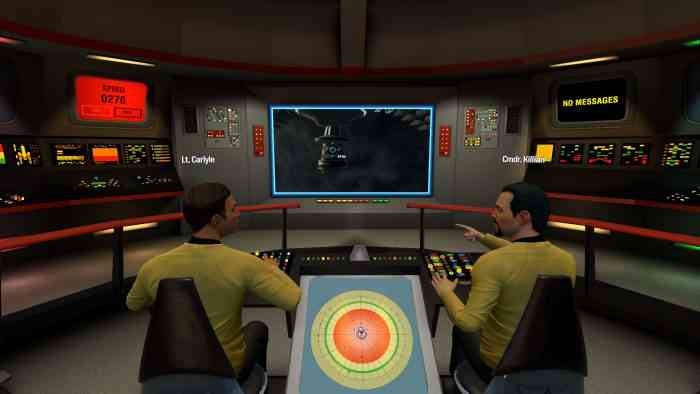 Star Trek: Bridge Crew feels like the next step for cooperative gaming. It builds upon the core concept that made Spaceteam and Keep Talking and Nobody Explodes so much fun to play, and adds an extra layer on top of it that makes it feel more like a traditional game. It might not offer as much freedom as players would like, and there’s not a ton of content, but it still manages to be one of the most captivating titles for VR. 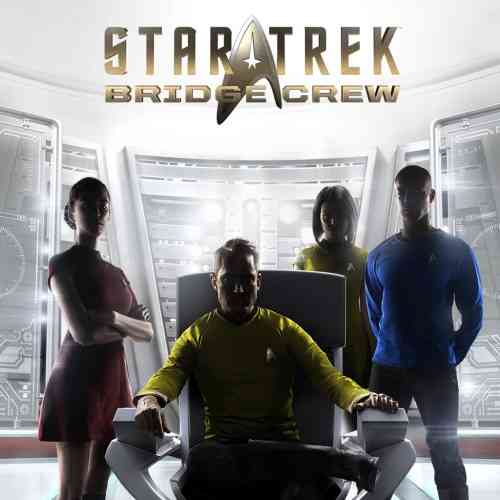 Racing Game Trackmania Will Launch On Multiple Platforms In 2023
Next Rising Storm 2: Vietnam Review – Committing Unspeakable Violence to Some Great Tunes
Previous ARMS Review – Nintendo Springs Another Hit On Us