Slain: Back From Hell Review

I’ll admit, Slain is a title I had sitting on my wishlist on Steam for a very long time. It looked like a charming little side-scroller that was filled with some serious shredding, both of man-bats and of guitars. It came out, and was heavily panned though, citing issues with controls, along with other technical problems. The sheer backlash would be enough to push the game off of Steam for good, but like any true metal album, Andrew Gilmour and his crew laughed in the face of adversity while throwing up some horns, and instead turned the game into one brutally old-school game that any masochist could enjoy. Between every frustrating death, there’s a ton to like about Slain: Back From Hell, so let’s get rocking.

Slain follows a sort of hub-world design. You play as Bathoryn, the white-haired, bearded warrior who is roused from his slumber by angels to take back the land from Lord Vroll and five other evil tyrants. They vary wildly in shape and size, and the level design varies just as fantastically. You’ll jump from wind-swept plains inhabited by horrifying witches, to poisonous sewers, and blood-soaked forests and fiery castles. It’s metal in every sense of the word, and while the aesthetic may turn off those who aren’t a fan of the genre, they’d do well to check this title out regardless, because this title is a treat for the eyes. Pixel art done well is always a pleasure to view, but Slain really makes a strong case for itself, and its design stands out so much in making the game really feel like you’re playing one massive, epic album.

“Between every frustrating death, there’s a ton to like about Slain: Back From Hell, so let’s get rocking.”

The game’s visuals are bolstered by some excellent guitar-skills courtesy of Curt Victor Bryant of Celtic Frost, and each stage and boss battle is supported by some fantastic audio effects, ending in a fairly gory celebration that involves Bathoryn doing what metalheads doing best. There’s definitely a demographic they were shooting for with Slain, but in all honesty, the pieces of the game come together just so well in terms of style that it is just flat-out fun to experience, especially if you’re a fan of the style of older metal albums where the odds are literally against you, and boy, do they feel against you some times. The music isn’t just straight up heavy metal though, as there are plenty of truly fantastic piano pieces as well. Celtic Frost should need no introduction to metal fans, and Curt’s brought his A-Game with this soundtrack, without a doubt.

The game is old-school difficult, but at times, it feels like it’s just a bit too much. For example, there are various gargoyle statues that are just a chore to kill. The initial game was a mess in terms of hit detection, but at times it still felt like there was something off, although part of it is just getting used to how the game handles. Slain plays quite well, but with how some of the adjustments to the game feel, it’s not entirely as ancient as some of the skeletons you’ll be chopping down, and boy is it satisfying to do so. 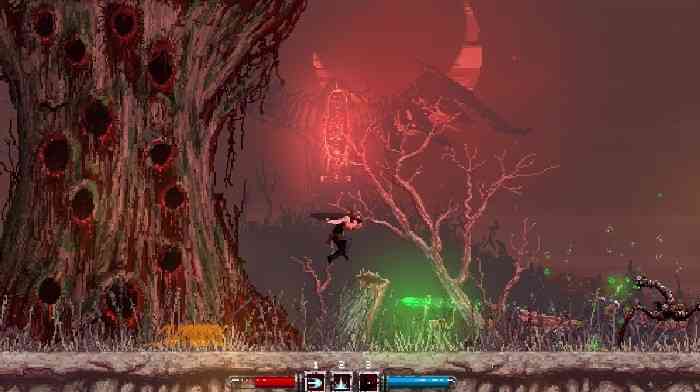 The combat makes use of a simple combo system, and there is a timing system in play for parrying as well. There is variation in paly with various elemental buffs as well, allowing for one to make use of enchantments such as Fire and Thunder to deal bonus damage to enemies. This system is a bit flawed however, as there aren’t really clear indicators of what is effective and what isn’t, and with how difficult this game is, adding an extra padding of HP to enemies that can already take a lot of hits, it makes some bosses and sub-bosses feel unfun to fight. Luckily, this isn’t a common trend, and the combat remains satisfying all around. The bosses, while visually impressive, can be a bit easy as well, thanks to their predictable patterns, but it’s still satisfying to bring the steel to them.

What stands out to me in this case, is that between how terrible the initial release was, and how the folks at Wolf Brew had to literally crawl out of the abyss to turn Slain into a competent title. Slain: Back From Hell is truly metal in very sense of the word. An amazing soundtrack, satisfying combat, and some challenging platform interspersed with some fun boss battles make Slain’s overhaul one worth looking into further. You may never be as metal as this game is, but that’s almost impossible to do. Wolf Brew did what many devs seem to shy away from, and despite a rocky release, they turned this title into one worth your time and money.

Cheers to you, Wolf Brew.

***A PC copy was provided by the publisher*** 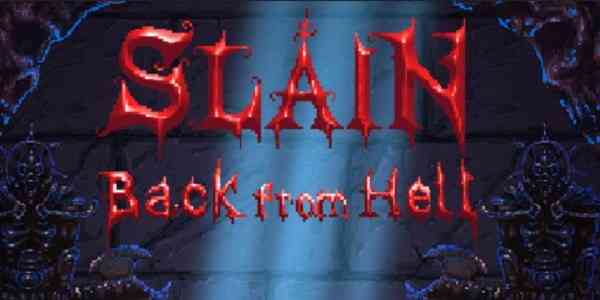