Safe House presents itself as a jaunty spy escapade, with vibrant, attractive art that jumps off the screen to draw the player in. Created by the one-man team behind LABS Games and funded through Kickstarter, this story-based game is about managing your spy base (or, you guessed it, “safe house”) and building the foundation of the CIA’s foothold in the fictional African country of Kazataire. One of those games you’d glimpse in a Steam summer sale, Safe House struggles to figure out how to give the player what they want.

This becomes apparent in the balance between story and gameplay. Safe House is about intrigue, based on the political turmoil of a fictional African nation as you, the manager of this secret base, gain new tasks to complete in the various rooms of your clandestine building. This game relies heavily on what many stories set in Africa do—unfamiliarity with the continent at hand. It’s always easy to believe there’s an extra country in Africa when so few people can name the ones already there. Despite this, the story is compelling enough that I wanted to see it through—it involves the overthrow of Kazataire’s dictator and the US’s involvement with it, but the explanation of Kazataire’s history with colonialism and the setup of the CIA’s presence gave me a strong idea of what the twist was going to be a long time before I got to it. Between days of monitoring my safe house, there would be little snippets of information about Kazataire, like “Kazataire was doing quite well before the French colonized it” and “Most of the people in Kazataire have forgotten their native language and speak English or French.” …Yeah, I know how colonialism works. The story’s basis was in using other countries for its historical setting, but it was ultimately shallow, as there wasn’t a single detail about Kazataire that couldn’t be applied to several other former colonies in Africa. 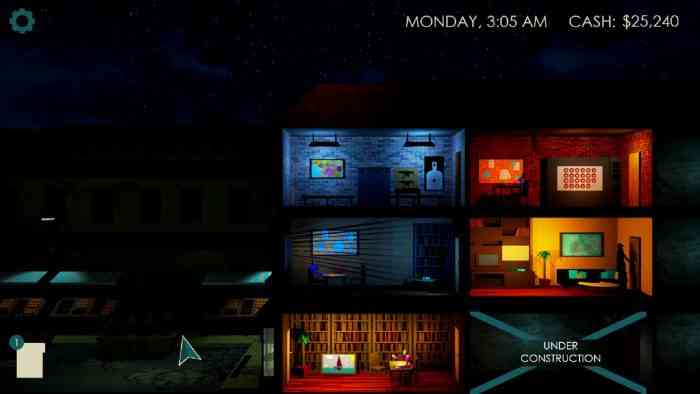 The story is most fun when you’re able to send your spies and soldiers out to do missions, but this doesn’t start happening until about a third of the way through the game. The gameplay is separated into three phases: construction, assignment, and activity, the last being the one you spend the majority of your time in as you confirm shipping codes, forge papers, administer painkillers to injured spies, and a number of other secretive activities. The construction and assignment phases help you build new rooms and send characters out to fulfill your objectives, which can include seducing a government officer’s wife or murdering a general, but they’re used much less frequently than the activity phase. But to put things plainly, the problem with the gameplay is that it’s boring. The player sits and waits for one of the rooms to go active, and when it does they fulfill a simple thing like decoding a five-letter word that has been scrambled a couple letters off. While Safe House occasionally realizes the potential to captivate a player into clicking away, there isn’t enough variety for it to stay entertaining. The game reached the point where I started getting too into the bizarre exchanges between the spies who entered the bookstore that acted as the base’s “front.” I eventually came to the conclusion that many of these poor trenchcoated men were not enemy spies but night owls desperate to buy books from the increasingly unstable and unfriendly saleswoman who often answered, “Can I buy a book?” with variations on “Don’t you see I’m busy,” and “Have you looked at the time?”

The bugs in this game are also a major issue, as it sometimes costs your base money, often setting the player back for story objectives, and their presence in the soldier and spy missions can make some of the tasks borderline unplayable. There isn’t enough direction about how to do some of the tasks, which led to my first playthrough being twice as long as the second, although I found the second infinitely more boring. There are three endings to the story portion of the game, but I’ll never see the third because the activity phase was so repetitive. There’s an “Endless Mode” to Safe House, but I got that feeling from playing the story campaign itself. The plot was just good enough to make me want to keep going but not enough to balance out the boredom eventually brought by the repetition; the story and gameplay feel very separate, with the exception of a late-game scene in the interrogation room. 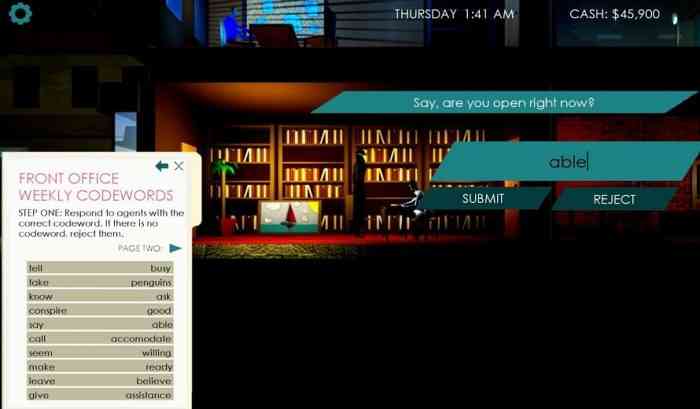 These better scenes, however, are often hampered by the last major problem of the game: the graphics. While trying to allow some room for forgiveness because of the independent nature of the company, the graphics are distracting in minor ways throughout the activity phase, with 3-D models that reflect a limited budget. Their use in major cutscenes, however, really do detract from the plot, especially since a unique and visually appealing art style is presented through the dossiers of the spies and soldiers, their art giving them all unique looks and styles, even if a bug gave me the dark-haired “Bel Petrova” twice. If there had been more of the art style that originally drew me in and less of the 3-D I would have enjoyed it much more, even if there had been less movement and action in the cutscenes as a consequence. The music, unlike the graphics, is not intrusive and does a good job of setting up the espionage feel of the game, although I would have liked a little more variety.

Once in a while, Safe House successfully pulls me into the allure of mindless task managing, but the gameplay drags down the strong elements of the story through its repetition, and despite the multiple endings, its replay value is low. Safe House delivers enough of a good time but never quite follows through with its promises, falling short of something that I’d recommend to friends. 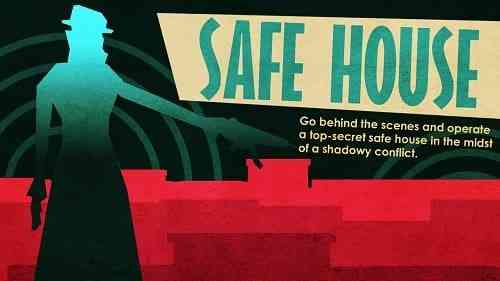