Nothing beats an all out street fight. Digitally, I mean. Thunderous pixel on pixel contact and brutal digital beep-boops can really make one’s day, or ruin it. It’s amazing really, how simple button mashing mechanics can feel so different from game to game. Streets of Rage 2 and Guacamelee are the bomb, while Double Dragon Neon is kind of lame. Why is that? And where on the scale does Mother Russia Bleeds fall?

Mother Russia Bleeds is the latest beat-em-up from Devolver Digital, which drops players into an alternate reality Soviet Union. After a kidnapping puts the streets at the mercy of cartel overloads, savage super drug Nekro fills the streets and turns an already dire situation even darker. Channeling the best parts of Crank, Mother Russia Bleeds sends a group of reluctant anti-heroes on a drug-fueled rampage against the powers that be. That sounds like more than enough story to carry a brawler. 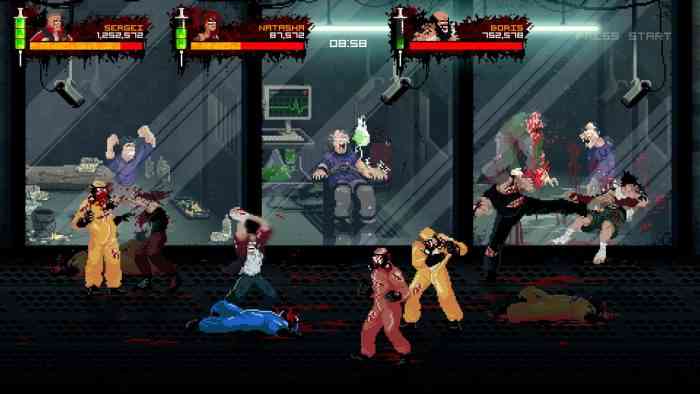 Like most brawlers, you’ll find yourself doling out harsh justice nearly constantly. Unlike most brawlers, though, that justice has some variety. Hammering the X button can get the job done most of the time, but there’s a more intriguing range of options out there for the adventurous. Charge attacks and dashes fall into the ‘of course that’s there’ category, but when punch, punch, launcher kick, jump, insane piledriver is an option, I tend to get creative whenever possible. Sadly, though, the 4 characters don’t have much difference between them outside of some minor speed and range changes.

“When punch, punch, launcher kick, jump, insane piledriver is an option, I tend to get creative whenever possible.”

Hit detection was a bit bothersome at times, seemingly requiring pixel perfect up/down alignment to register a hit, while enemies were often able to score hits and knockdowns from ridiculous angles. I mean, brawlers are supposed to frustrate you, but a more level playing field functionally would have been welcome, and I wish there were some more compelling gameplay choices on hand.

The one interesting mechanic is drugs. Yep, you’re hooked on Nekro, so you’ll be forced to use the drug to either heal up or go into an insane drug rage. When enemies are near dead and flopping around on the floor, you can drain the remaining Nekro straight from their soul. You addict. 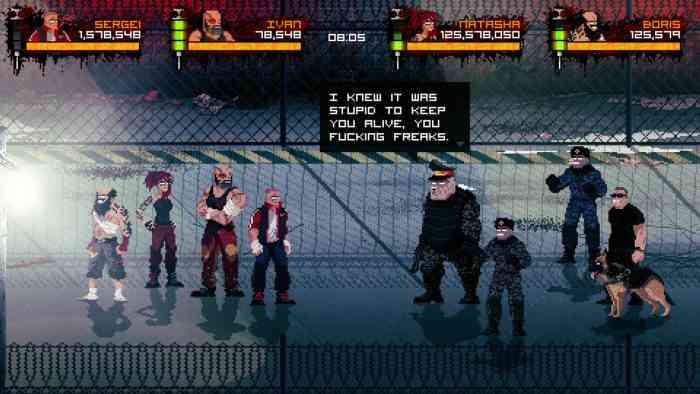 The difficulty ramps up quickly as you progress, with the screen frequently being damn near full of bad dudes and dudettes who want to murder you in graphic ways. Baddies have a wider range of tactical styles than most other brawlers, from syringe tossing old ladies to absolutely maddening jump kicking cool dudes, and a whole range of boss type characters.

Boss battles were fun to play out, each having a trick or gimmick that required some careful planning and thought. Standouts from my playthrough included a straight up gun shootout and being chased by a huge spiked steamroller. It’s outlandish in the best possible way, and if you are the kind of person who embraces weirdness you’ll find plenty in Mother Russia Bleeds. 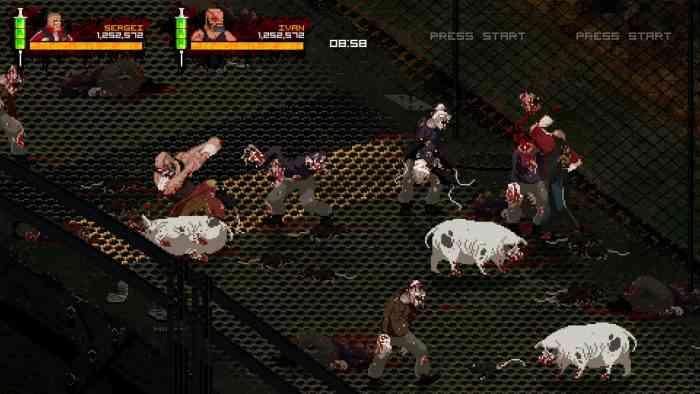 Speaking of weirdness, the dialogue in the game is weird ++. It’s surprising that in Soviet Russia, people are fans of phrases like “Christ on a cracker!” Though I never lived behind the Iron Curtain, I’ll assume that’s not what people talked like in the USSR. The game wisely gives you the option to skip through dialogue too, which makes me wonder why they bothered shoehorning in so many archaic narrative ideas here. Reverence for a classic genre is one thing, but the game could have taken a few lessons from the witty and hilarious story put forth by Guacamelee.

Aesthetically, Mother Russia Bleeds follows the general Devolver Digital style from recent years. It reminds me a lot of Hotline Miami in that sense, especially with the level or gore that’s on display. It’s substantial. Enemies drag their half-dead carcasses back into battle when they clearly need to rest, making you almost think twice about ending their suffering. I typically reconsidered after remembering how satisfying the sound effects are – this is a title that desperately needs a sound test mode. Oh, the music is pretty slick too. 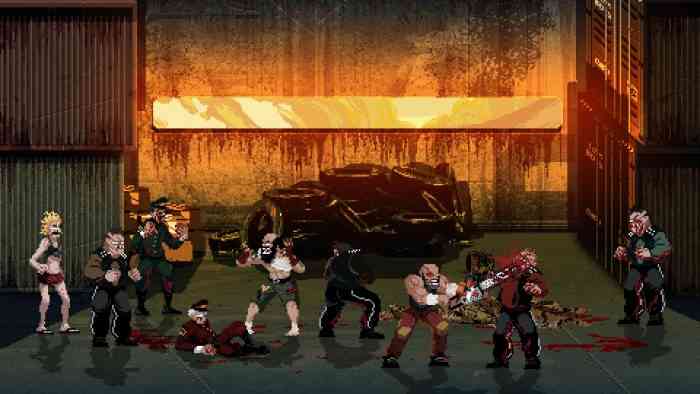 While Mother Russia Bleeds is a competent brawler with a nice variety of punishment to extoll, it clings a little too tightly to old school mechanics and ideas about gameplay and narrative. The slick presentation is nice to look at, though, so you could do much worse for an afternoon on the couch with your buddies. 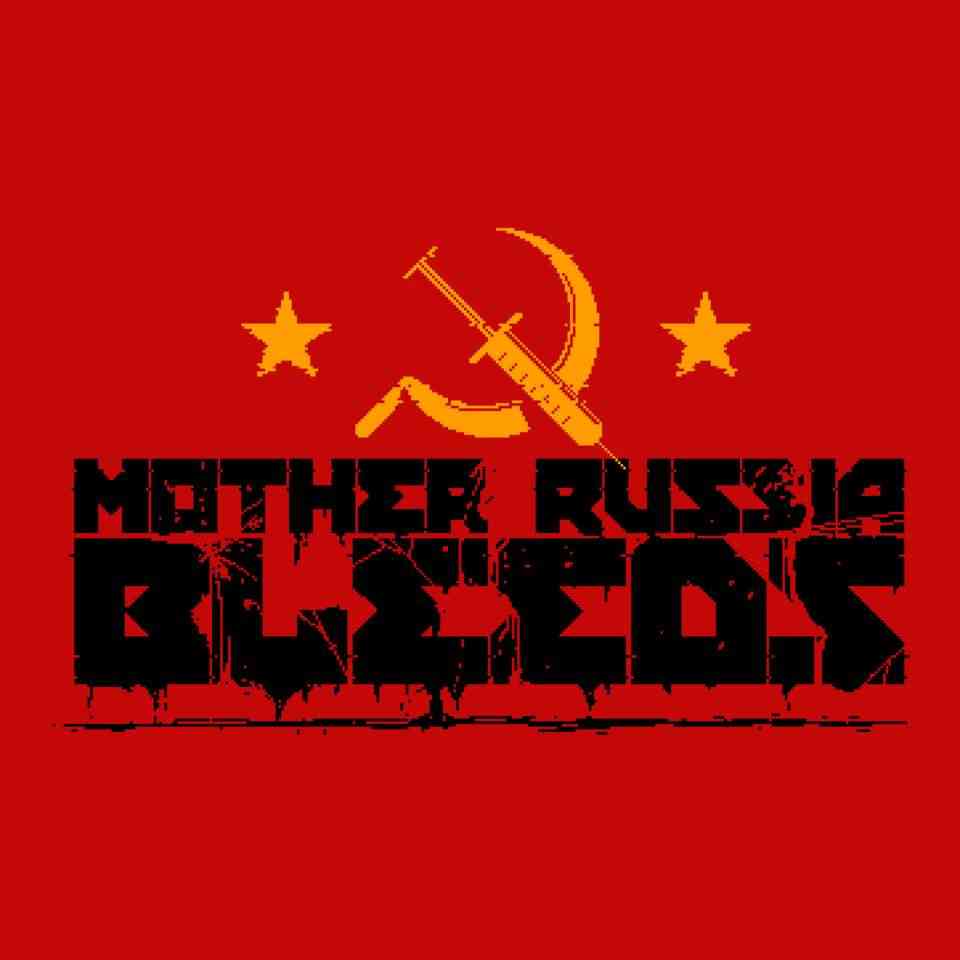 Devolver Digital Valued At $950,000,000 In London Stock Exchange
Next Power A Fusion Controller Review – Xbox One Controller For Pros On The Cheap
Previous Call of Duty: Black Ops 3 Salvation Review – IW Has Their Work Cut Out For Them