Forced Showdown Review – The Best Intergalactic Game Show There Is

When I first booted up Forced Showdown I wasn’t too sure what I was playing. Is this a brawler? Why do I have decks of cards? Am I on some game show? Forced Showdown is a twin stick shooter/brawler where you play one of four contestants on the Galactic Game Show for the amusement of billions of viewers. You must fight your way through hordes of enemies to reach the showdown with the boss of each contest. The game’s theme and humour are reminiscent of the Borderlands series in that quirky, dark kind of way. Luckily the aesthetic and dialogue keep you in a good mood because the game starts out a little frustrating; however, once you finally piece together all of the concepts and strategies the game borrows from other genres you’ll quickly become a crowd favorite on the Galactic Game Show.

At its core Forced Showdown is a twin stick shooter but incorporates elements from several other genres to keep things interesting. Each playable contestant on this grizzly gameshow has a basic attack and three abilities, one of which might be a passive. Each of these characters has a unique enough playstyle and card set to be able to build different strategies around each. I found myself wanting to switch back and forth between contestants until I found that perfect combination of abilities and cards that fit my playstyle which I consider a plus.

“…once you finally piece together all of the concepts and strategies the game borrows from other genres you’ll quickly become a crowd favorite on the Galactic Game Show.”

Once you select a contestant you start your long journey through the game show. In order to proceed through the stages you must clear two out of four rounds. These rounds will have a randomly selected boss and an active effect. Sometimes these effects will actually help you out but are balanced by adding more enemies while others will result in debuffs to your character with the especially difficult debuffs reducing the number of enemies. After completing two of these rounds, you must fight the guardian of the gate that leads to the next section and repeat this process until reaching the final boss, all the while collecting points to purchase boons, effects that are persistent to your character or companion for the rest of your current run (think mutations from Nuclear Throne).

The arena battles for each round are reminiscent of the old Gauntlet games with much smaller maps. At the beginning of each round you draw from your deck and choose which cards to play. Each card has an associated mana cost and each round you gain one more mana to add to your pool.  It would take another several hundred words to describe all the intricacies of the types of cards you can have in your deck, but they are essentially buffs or consumables you can use for the remainder of the round (until you beat the boss and are teleported back to the main hall). I found this to be one of the greatest strengths in this game. Depending on what type of enemies I would encounter in the round or what active curse was in effect I could choose the effect I wanted and when, leading to some interesting strategies on the fly. I love that feeling of drawing into the exact card you need at the exact moment you need it and pulling out a win because now you have that extra bit of healing or that extra bit of damage. This type of gameplay is great for the longevity of the game and keeps every run fresh. 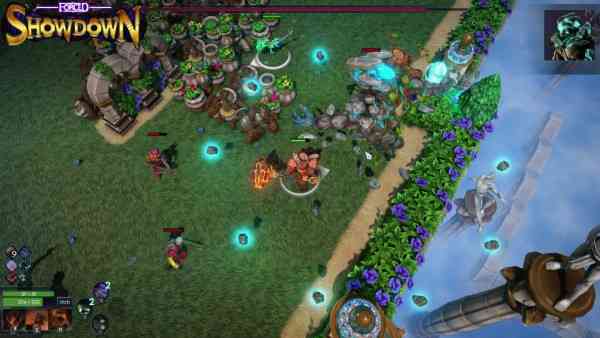 Similar to the playable contestants, there are 3 companions you can unlock and choose to accompany you through the arenas. I didn’t find these too useful heading into the later levels; I considered them more of a temporary agro shield since they die fairly quickly to bosses and elite mobs. It is possible to buff your companions with cards from your deck or with boons so there might be a viable strategy for these guys yet.

On the topic of cards, the basic deck the game provides for each contestant is actually pretty decent. I would strongly recommend using it for a few playthroughs to get a good feeling for what the strength of each contestant is and from there tweak the basic deck with cards you win from the fortune spinner. Currently there is not an option to craft a specific card, but there is a mechanic for deconstructing cards that you have more than two of (decks have a limit to two of the same card) into a currency that can be recycled to get a random card of a particular rarity. I would like the ability to spend a bit more of the crystals to get a specific card, but I will give credit for the ability to recycle unwanted duplicates. 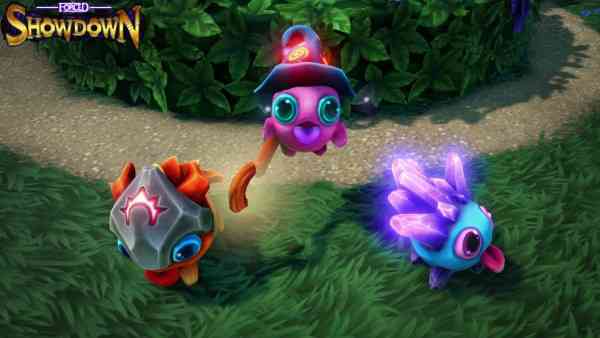 As a whole the game plays really well. It somehow pulls off the incorporation of elements from so many different genres surprisingly well. Unfortunately, the battle mechanics seem a little unpolished. Some arena stages devolve into a chaotic mess of explosions and shots from across the map. I don’t have a problem with the chaos and taking some heavy damage, but there isn’t a reliable form of healing in between arenas. If you don’t draw health buffs or healing, you are in for a real difficult time with the levels that constantly explode. I will concede that some of those explosions are avoidable but one boss in particular left me with a bad taste: the snake boss. This boss has one particular move where he charges you wherever you are. There is little to no telegraphing of this move, especially when you are off screen. I’m sorry, but I can’t stand dying from enemies that charge or teleport from off-screen with no telegraph (looking at you Rakanoth from Diablo 3).

I think Forced Showdown has done a great job of incorporating different strategic layers on top of a twin stick shooter. The random effects on each level combined with the meta card game style of buffs keeps the game interesting while you are grinding out the unlocks and competing in daily runs. I can see myself sinking many hours into this game just to get the perfect deck to take me to the top of the leaderboards.

Top 10 Video Games By PlatinumGames
Next 101 Ways to Die Review – A Lot of Death, That Barely Comes to Life
Previous Nights of Azure Review – A Unique JRPG That Thrives On Simplicity