Attack on Titan is the latest offering from Omega Force and Koei Tecmo, of Warriors/Musou-style gaming fame. Originally released in Japan earlier in 2016, Attack on Titan is an anime tie-in game aimed towards fans of the manga and anime series. As a fan of the series myself, I was quite interested to see how well they adapted the unique fighting animations as well as the storyline. If you enjoy destruction, fast-paced combat, and taking down hordes of titans, do not sleep on Attack on Titan.

For fans of the Attack on Titan series, the plot within the game will be very familiar; however, Koei Tecmo and Omega Force add some additional missions featuring some of the other characters. Because of this, fans of the series are offered some unique storylines to keep them interested. For those unfamiliar with the series, humanity has been living for the past thousand years within three large, circular walls (Maria, Sina, and Rose) which keep out the titans. However, mankind receives a grim reminder of what lay waiting outside. Now, mankind must fight back against these violent giants, or become fodder themselves. Newcomers of the series, do not fret, the game does a very good job in keeping you in the loop of the story.

“If you enjoy destruction, fast-paced combat, and taking down hordes of titans, do not sleep on Attack on Titan.”

The game features missions with a variety of characters, objectives, and locations. The primary game mode is the Attack Mode, which is the story mode with missions related to the first season of the anime. There are also other modes such as Expedition Mode which features multiple side quests, as well as a multiplayer mode within Expedition Mode. Like most Warriors/Musou-style games, the story mode of the game is not particularly long, but there is plenty of replayability using your favorite characters in past missions.

The game controls very well, with responsive controls and fluid movement. In particular, the Three Dimensional Maneuver Gear works very well given the speed and nature of the device. At times, I personally got my controls mixed up, likely as I am not used to using the Triangle button as an attack button. Without going in-depth with the controls, an adequate tutorial as well as on-screen commands do a particularly good job in equipping players with the tools to take out titans. Furthermore, the controls worked well for the most part no matter what character or form of transportation you happen to be controlling. 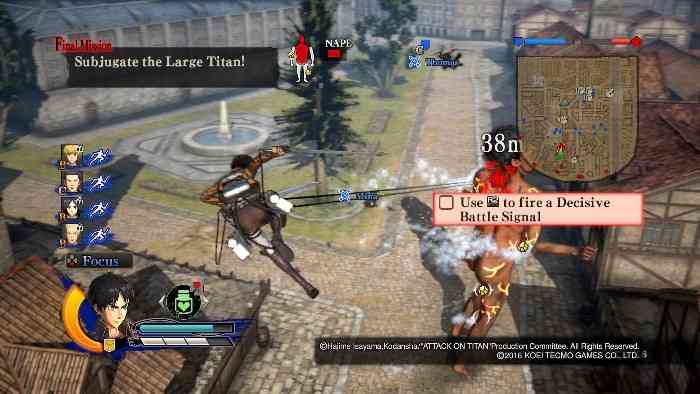 The computer AI in the game works very well. Your allies and teammates that you are able to command do as they are told, and otherwise perform well even without instructions. On the other hand, the titans can seem a bit dimwitted at times, though that falls in perfectly within the lore of the story. Because of this, the seemingly lack of good AI among titans could easily be defended as a planned game mechanic.

The graphics of the game are very bland, though the game does follow the aesthetics of the anime closely. The colors within the game are very dull, usually with a slight brownish overtone. Although this does well to paint a sense of bleakness in the world, sometimes a little brightness goes a long way. Despite the coloring of the game, the character designs of both the main characters as well as the titans are accurate depictions of their anime counterparts. Furthermore, despite looking relatively simple, the levels and structures are well coordinated and the destructible environment is a nice touch. Lastly, my experience did not feature any screen tearing, framerate issues, or slowdowns.

“Attack on Titan is an enjoyable title featuring fluid gameplay, enjoyable action sequences, and a story mode that all can enjoy.”

One caveat regarding Attack on Titan, which may be good or bad depending on who you ask, is that it certainly feels as though it was developed by the Warriors/Musou-type game developers. Despite this, Attack on Titan is an enjoyable title featuring fluid gameplay, enjoyable action sequences, and a story mode that all can enjoy. The game does a very good job in introducing newcomers to the series as well as keeping fans entertained. Although there are many interesting non-combat portions of the series that do not appear in Attack on Titan, the game proves itself to be a titan in the anime tie-in genre of video games. 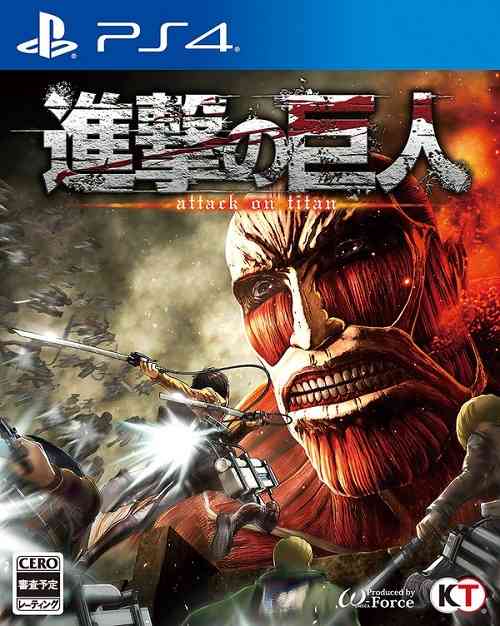 Call of Duty: Vanguard & Warzone Team Up With Attack on Titan
Next F1 2016 Review – Kicking It Into High Gear
Previous Master of Orion: Conquer the Stars Review – It’s a Dangerous Universe