The Good, Bad and Most Bizarre Sex Scenes in Video Games (NSFW)

It’s that time of year again! The snow has melted away, the flowers are beginning to bloom, and Valentine’s Day is in the books. Video games have grown to be much more complex beings, they too have engaged us in love and loss. Sometimes it appears like poetry, something beautiful. Sometimes it’s terrifying and painful to look at, and other times it’s laughable. Despite the progress video games have made, as they come closer to being an accepted art form, romance in games is still a rather difficult thing to pull off. With that in mind – and its best to remember this article is definitely NSFW – here are some of the Good, the Bad, and the Bizarre Intimate Moments from Video Games.

If you have encountered a girl who says they don’t play video games or they aren’t good at video games, chances are The Sims doesn’t fall into these categories for some reason. The Sims has been an incredibly popular series, allowing players to build and destroy the lives of the people they create like a malevolent god. But to be a true simulation of life, the act of creating life also needs to be simulated; this is where Woohoo comes in. A rather blatant euphemism, falling in love in Sims will often lead to the “Woohoo” option, which can be performed in bed, in the shower, in the pool… The game remains censored and what you do see is more likely to make you laugh than inspire any creative thoughts, but you can’t say it isn’t memorable for its quirky animations and hilarious sound effects. 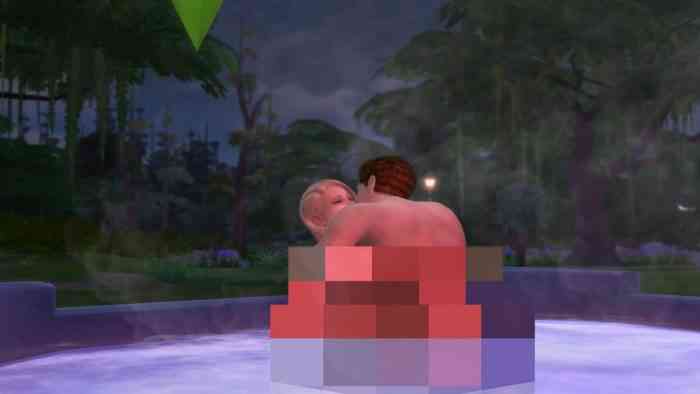 Most of the adult-themed activities of the GTA series aren’t exactly quirky by definition – in fact, anything involving Trevor is downright terrifying. There is, however, a particular mission in which Franklin becomes a member of a sleazy paparazzi team. Pursuing a young starlet, Franklin discovers the less-than-enthusiastic starlet is engaging in some romance-less romance in the backyard. While not out of character for the GTA series, it’s a quirky and hilarious moment we could easily see not only in video games but any number of movies that would leave us with splitting sides.

Hear me out on this one. The God of War series has reached monumental acclaim for its combat, huge stages, massive enemies, deep mythology, and one hell of a protagonist. With another game on the horizon, the franchise is alive and well as one of the greatest Sony exclusives of all time. One of the recurring events in God of War is Kratos’ rather… aggressive treatment of scantily clad women. Beginning the quicktime event (teehee, quicktime event) with them will pan the camera off screen, leaving only rattling surroundings and screams of enthusiasm to let you know how well their soiree is going. For a rage-filled demi-god grieving over the wife he accidentally murdered, I gotta wag a finger at this one. While having this as quick time events isn’t necessarily bad, I feel like it could have been handled better; we don’t  need to see the act, but its inclusion in the series feels forced and honestly a bit degrading to the gaming community thinking we need it in the game. Physical romance in games should serve a purpose to the game; otherwise, it’s an insult to our intelligence.