As a series, Puzzle & Dragons has been around for a while in Japan. Puzzle & Dragons Z + Puzzle & Dragons: Super Mario Bros. Edition, a 2-in-1 game cartridge, marks the first global release of the series; but why wait so long? Puzzle & Dragons is an interesting blend of puzzle and RPG style games that has you battling monsters by moving around colored baubles on the bottom screen. At first you wouldn’t think that those particular genres would blend very well, but they do….they really do. The genius of it lays in the color coding of the puzzle baubles, and the elements of the games variety of monsters. Red baubles correspond with Fire attacks, Blue baubles with Water attacks, Yellow baubles with Light attacks, so on and so forth. When three or more baubles of a particular color are lined up, the dragons in your party that match that element attack your foes. It’s simple, elegant, fun, and the last time I saw this many dragons whacking each other with colored trinkets was when I went antiquing with Nana.

“The genius of it lays in the color coding of the puzzle baubles, and the elements of the games variety of monsters.”

When you tap a colored gem on the bottom screen, it can be dragged and moved in any direction, which allows you to line them up for attacks. When this is done the other orbs in your way are displaced around it, moving them into different positions than before. Once you get the hang of it, it becomes quite easy to string together chains of orbs for combos. Combos are important as they multiply the attacking power of your party. The more things you string together, the more damage you deal. And where there is damage, there is also a health meter. During combat, the enemy team will obviously attack you back, which means that staying alive is crucial. In all, there are five creature types, but six types of baubles. The sixth type of bauble is a heart, which recovers your health meter. These heart orbs also benefit from combos, so planning your moves ahead of time is the best course of action.

When you start up the game you are given a couple of Dragons to set you on your way, not unlike a getting your starter in a Pokemon title. And as you progress through the world, you will fight new species of dragon and acquire their eggs. Gathering up eggs and new creature types is very important to your success, as it will allow you to combine different inherent traits of these creatures. Teams are constructed of five creatures in your catalogue, and you can have multiple teams, the exact number of which is dependent on your progression. Each creature also has an activated ability that can be used during combat at any time, but for a cost of some energy, which is earned by clearing orbs. Before each combat phase you are allowed to choose which of your teams you would like to use. 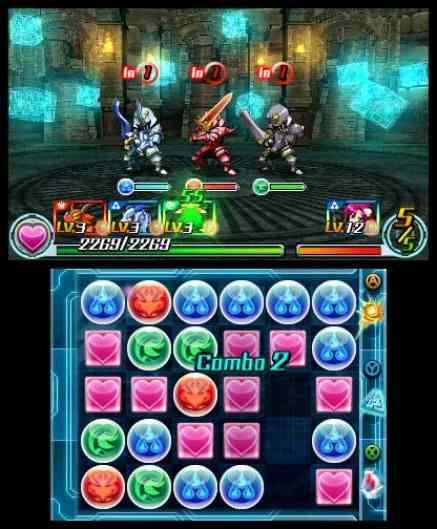 Puzzle & Dragons Z is at its visual best with the 3D turned on. Its style during combat is reminiscent of Dragon Quest as if it was done like a pop-up picture book. Each creature’s body is clearly broken up into layered piece, which bobs and moves individually, and reacts accordingly to actions. While your party isn’t visible, it’s more than satisfying seeing all the new and impressing creatures cropping up in front of you as  you swing colored orbs around. Its soundtrack is nothing to shake a stylus at either. Puzzle Dragons does a great job of keeping the pace up with its catchy and upbeat battle music.

Despite my enthusiasm for it, Puzzle & Dragons Z wasn’t actually the first game to play in this delightful duo. Puzzle & Dragons: Super Mario Bros Edition got the brunt of my attention for the first little while that I had this title. Having never played a Puzzle & Dragons title, I figured that jumping into something with familiar faces would soften the blow of something new. After having played them both for a considerable amount of time, and a great deal of humming and hawing, I found that the original Puzzle & Dragons Z was the superior game. It feels better paced, the creature abilities seem to have more meaningful impact, and the creatures are less identical looking. By my fifth hour in Mario Bros mode I had about 7 Koopa Troopas on my side. That said, Puzzle & Dragons: Super Mario Edition still has its own value and its own quirks. 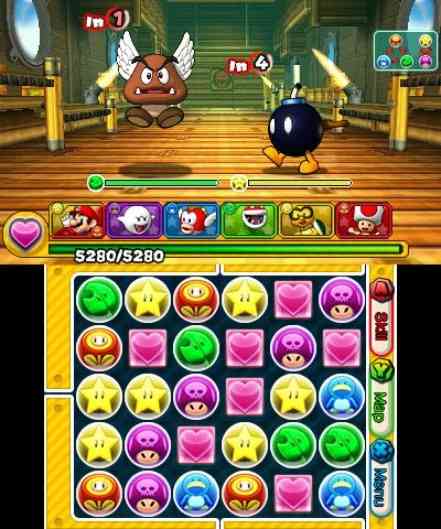 Super Mario Bros mode is fundamentally different in a number of ways. The game is broken up into worlds, much like a canonical Mario title would be. It is structured with a life system, wherein if you die during combat, you will be able to continue until you run out of lives and are forced to start the game over. And, you have marginally more control over your party than you would in Puzzle & Dragons Z. Each sequence of fights is the equivalent of a stage in a Mario title. Once you clear the sequence, you move onto the next “stage”. This feels spot on. It gets the point of both Mario and Puzzle & Dragons across in a way that makes sense for both series. My main qualm is the combat difficulty. I’ll gladly eat a shoe if somebody can tell me I was doing it wrong, but at times it felt way too damn hard. Creature abilities feel next to worthless beside the ones in proper Puzzle & Dragons. The game feels like it leans on the fact that you SHOULD be losing lives due to excessively powerful enemy attacks. Dying over and over against a Thwomp is no fun. It sort of…flattened my interest. Get it? Yeah you do.

Puzzle & Dragons: SMBE (Yeah, I got tired of typing it) seems to borrow a lot of its assets from older Mario titles, predominantly the New Super Mario Bros. games. Outside of its combat graphics, which boast the same blend of Dragon Quest and picture book, this game is nothing you haven’t seen or heard before. The music is the greatest offender of this. I didn’t hear a single original track in the SMBE version. Each and every piece is something that I had heard from a mainline Mario game. This isn’t wholly a bad thing; I mean Mario music is pretty iconic, but these tracks aren’t even remixed…they are just straight recycled.

“It brings a different type of puzzle game up to bat…one that rewards a nerdier, less mom-like demographic of gamers.”

All in all, Puzzle & Dragons Z + Puzzle & Dragons: Super Mario Bros. Edition. is surprisingly addictive. It’s no wonder it caught on the way it did overseas, and I for one am happy it finally came across the pond. While the Mario Edition of the game was a tad disappointing, the core game is far from it. It brings a different type of puzzle game up to bat…one that rewards a nerdier, less mom-like demographic of gamers. It also strikes a lot of the same cords as a Pokemon title, having the player go out in search of cool new monsters to tame and use in battle. All in all this 2-in-1 is well worth the buy…and hey, you get a neat little Mario game to play around with too!

Next Galactic Civilizations III Review – A Stellar, Life Sucking 4X Strategy Game
Previous The Perils of Man Review – Its Strong Story Makes for a Solid Game Despite its Short Length