Well over 30 years ago Warlords on the Atari system was the go to multiplayer game. Though Atari is no longer a pioneer in terms of making new consoles, they have taken the time to help bring Warlords back to life as they have given it a new coat of paint so to speak. Griptonite Games has taken the wheel and created a remake of Warlords available on the Xbox Live Marketplace.

To give you a crash course on the game itself, two to four players guard a castle via the use of a shield at the front gate. With this shield you block fireballs and return them to the sender in an effort to take out your opponents. The core of Warlords gameplay remains the same as the original game, but there are some new features that enhance the experience. At times you can attempt to catch one of the many shots bouncing around the stage. If you manage to pull this off you can charge this shot and dish out massive damage to your enemies wall. That being said, the situation isn’t without its own dangers, as the longer you charge it the more your wall will be damaged until you release your shot. As the action progresses things become more chaotic. A total of five fireballs that actively cause havoc are possible. Upon the destruction of a castle the number of balls returns to a single fireball. This rotation of fireballs keeps a strong pace flowing during battle while keeping players on their toes. 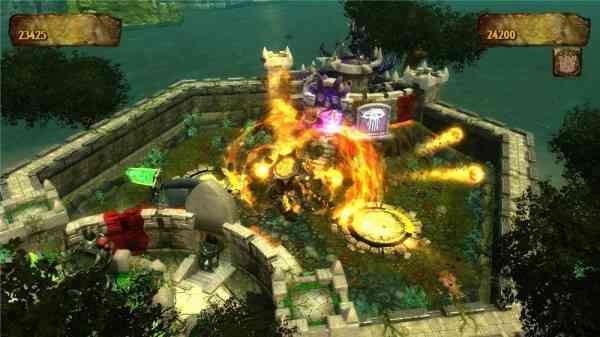 One of the larger new features of this recreated game is that Minions join the mix. Minions are referred to as Snoots, and Snoots are small creatures that take on an assortment of jobs. These jobs include repairing your damaged structures, attacking enemies, and assembling power-ups for upgrades. You command a flag-bearing Snoot with the right analog stick, and his troops will follow him to oblivion. Often times on the way to a destination, Snoots will come face to face and will take each other out. As you command your flag-carrier it is often best to try to stand on one of the power-up icons on the battlefield. In doing so you’ll fill a meter that results in obtaining troop invincibility, extending your shields, or giving you power to reverse or slow your opponent’s controls.

To top things off, a black knight will occasionally appear to do some serious damage to everyone’s walls. Though your Snoots can attack him they are far from the best option. The key to defeating the black knight lies with the white knight power-up. If you’re feeling brave, you can take aim with your fireballs and snipe the black knight, but that only makes him mad. If he isn’t already going to town on your wall, he soon will be. This black knight adds a bit of intensity to the game as you never know when he will show up, and when he does it can be quite chaotic.

Though this game throws a platter of destruction your way it is not as overwhelming as it may sound. Well actually, it can be monstrously overwhelming but in the best way possible. These heated battles are constantly evolving creating a unique and fun match every time. Managing your leading Snoot isn’t terribly distracting, and solid controls give way to a fun experience. Main abilities and commands are mapped to a direction on the d-pad, which gives players full control of what is going on. All you have to work on is refining your reflexes. 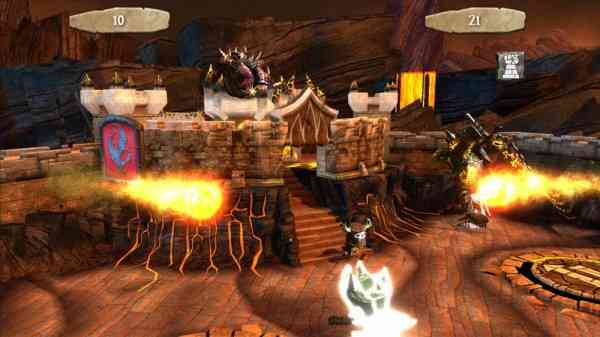 The new coat of paint on Warlords looks great, but it is not without some flaws. Characters are charming and well animated on the battlefield, but the framerate takes a serious hit quite frequently. Though the framerate never causes any serious damage, it does hamper the experience somewhat. Two camera angles are available; one a ¾ isometric view while the other is a more traditional overhead perspective. Everything in the audio department is solid, complete with a fantastic announcer and shredding heavy metal guitar riffs.

All in all, Warlord offers a reasonable amount of content. Included is a campaign, and of course local and online multiplayer. The campaign is nothing particularly special, though it serves as a solid tutorial to introduce new players. Training against the AI is fun for a short amount of time, but the game is truly meant to be played against other human players. I was happy to see the return of local multiplayer, as experiencing the chaotic nature of this game next to a buddy is loads of fun.

Though the framerate can bog down the experience, Warlords offers a fun game to battle with friends and enemies alike. The controls are well designed and the shredding metal soundtrack sits well with the chaotic essence of the game. Though the campaign is fairly forgettable, its strength lies in its multiplayer content. Selling for approximately $5, which is really cheap, you can’t go wrong picking up Griptonite Games remake of Warlords.

Next The Last of Us: Left Behind (PS3) Review – Ellie Gets Her Shot at the Spotlight… and She Shines
Previous Dustforce (PS3) Review – Wait… it’s a Game About Sweeping?