It must be difficult nowadays to come up with a completely new and fresh idea for a game. This must be why we see so many remakes of classic hit games. Well that is what Bohemia Interactive has done with Carrier Command: Gaea Mission, which is a modern remake of the original 1988 Carrier Command. Having never played the original game, I really didn’t know what to expect. The original game wasn’t available for the systems I had in 1988, but I do recall some buzz about it. So does Bohemia do the original Carrier Command justice with this remake? Read on and find out.

The Campaign portion of the game starts out with you leading an attack on a moon called Taurus in an attempt to take control of it for its resources, to help sway the battle against forces who have taken over Earth. Unfortunately something goes wrong and your squadron crashes on the moon and only a few survive. From there you set out on foot with another soldier who guides you (almost to the point of holding your hand) as you roam about in a FPS-style game. Your first goal is to make your way to a damaged carrier. You will venture through a very linear path with just one gun, shooting at very generic looking robots. I found myself getting really bored at this point but I trudged through it with the hopes something more interesting came my way. 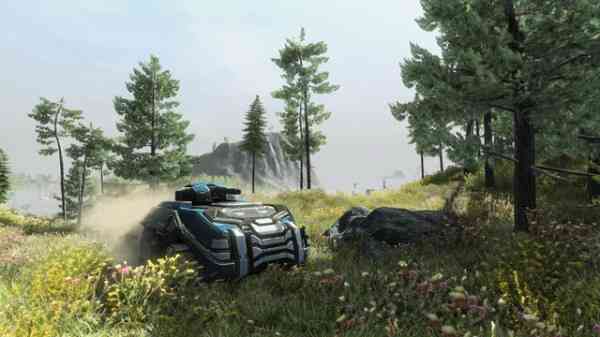 After this short and dull FPS sequence, I came across the first vehicle in the game. My squadmates started directing me how to control the vehicle and what I could do with it. I found that controlling it was difficult using a mouse and keyboard, so I switched over to using a game controller, where one analog stick steered and the other aimed my gun. Playing with a controller honestly felt more rewarding. Your ground vehicle’s health, fuel and ammo could be topped up by just driving up to various refilling stations shown on the map and pressing the right button. Topping off the vehicles various items is quick, which came in handy when you are on the run. You have two viewing choices when moving your vehicles: a first person or 3rd person view. I stuck mainly with the third-person camera angle because you need to see more of the surrounding area so you don’t suddenly find yourself sliding down a hill, out of control.

After becoming familiar with your new toy, you eventually make your way to the damaged carrier, dock at its side, and make your way inside. Once again you are back on foot in a short FPS segment taking out more robots. After all the robots are cleared, the surviving soldiers join you on the carrier, and you take command of the ship which turns out to be completely remote controlled, so you don’t need to leave your command chair. However, the carrier is badly damaged and in need of repair. So from your new seat you are able to remotely control the vehicle that brought you to the carrier.  You wil then drive it to the nearest island on your map to search for supplies. This is where the game’s focus shifts to the main campaign where you will be taking over various islands you come across by hacking into base computers. I quickly found that this is not that simple because all the islands have defenses in the form of ground roaming robots, vehicles, as well as small and speedy airships. Not to mention most of the bases have gun turrets. Much of the time you will be running around activating switches to shut things down to gain access to areas and bypass enemy defences.

Different islands have different properties: some have production facilities which will produce new equipment or vehicles; others are rich in resources that you need to repair your carrier and produce your equipment. There are up to 33 islands in the game all with various environments. Some can be swampy, others more temperate and others more desert-like. In the swampy areas it is really hard to control ground assaults as you slip and slide in the mud and wet grass. 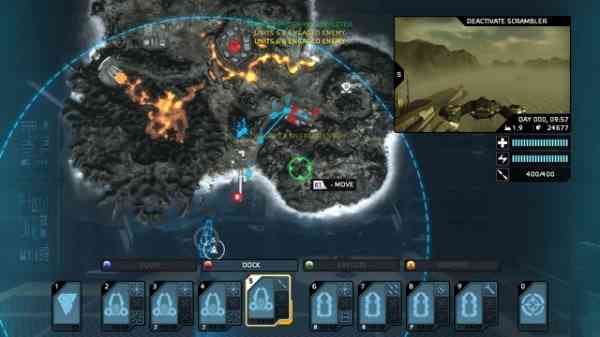 This is where a real time strategy-like gameplay element comes into play as you dive deeper into the game. Some islands get tricky and require you to have more than one vehicle on the go. You can have up to four ground and four air vehicles executing orders at the same time, each equipped with various guns and devices that you produce to aid you in taking over the island in question. What is nice is that you can just point and click on the map where you want a certain vehicle to go, and they will plot a path to go there. Unfortunately, at times the vehicle AI will run into problems and it get stuck on the environment. You can take over the vehicle at any time manually if this happens, but I just don’t like micromanaging all the time. I found the AI for the game as a whole to be very hit or miss, with spots of brilliance followed by some completely bizarre behaviour.

I also found myself waiting a lot, whether it was waiting for my carrier to travel from one island to another, or waiting for new vehicles or equipment to finish building (which I then had to wait again for it to deliver itself to me from the island it was building on). It’s sometimes faster to just sail my carrier to the island in question to get what I need, but that wastes fuel. The game tries to fill in the wait times when the carrier is traveling with chatter from in-game soldiers offering tips and advice, but that gets old fast.

There was still something bugging me about the game as I progressed. Something seemed to be missing or left out – then it hit me. I was craving for some feedback or human interaction from the opposing forces. Everything I was fighting was automated. Sure, my goal was just to take everything over and survive because this was war, but it would have been nice to see a human face or some kind of personality from the other side.

Other than the main campaign, you have one other mode called “Strategy Game”. Here you are pitted against the computer in a large randomly-generated battle, but you have various settings at your disposal like the number of islands, enemy strength, what resources you start up with and how fast islands generate the materials you need. You can also set winning conditions too, like a number of carriers destroyed, or islands that need to be taken over. It’s a fun mode if you want to avoid the single player story and get into the thick of things quickly. This being said, the game still suffers from many of the issues the main campaign has (waiting, lack of personality, etc.). 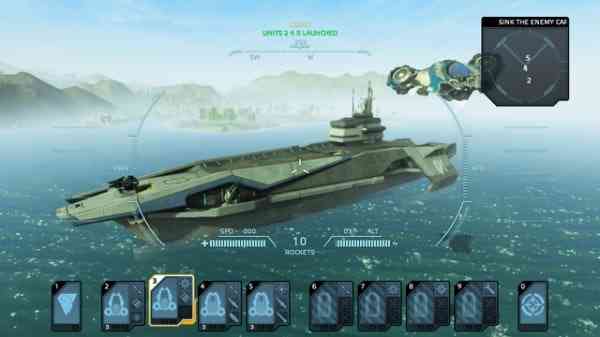 The lack of multiplayer was also an issue for me. It is possible the developers of the game could add it in the future, but right now it’s just a single player game. I feel this was a missed opportunity and in the end hurts the overall experience.

In terms of the visuals, the game is nice to look at, but nothing blew me away. Weather and environmental effects are nicely done and you can see a bit of influence from the ARMA series in it. I was running it at 1900×1200 resolution with the graphic settings at medium and there was no slow down. I did however experience some weird clipping issues while driving vehicles. I would be driving along and suddenly part of the screen would flash like I drove through something.

The music in the game is odd. It’s very big and orchestra-sounding with a large choir, but it only plays at certain times. The rest of the time it’s just environmental sound effects mixed with sounds of vehicles and gunfire. Voiceovers from the characters work quite well, and no one seems to be overacting their roles, but as I mentioned earlier, as you progress through the game you do get somewhat tired of hearing what they have to say.

For a game that attempts to mix in some First Person Shooter sequences with some Real Time Strategy elements, Bohemia Interactive did a decent job. Unfortunately, the overall experience falls a little short due to some of the issues with the AI, large lulls in the action as well as the lack of any multiplayer and some technical issues.  Overall I found that the game just seems to lack some personality. Old school fans of the original may enjoy Carrier Command: Gaea Mission for the PC but for the price, the rest of us may just want to pass.