The Top 5 Beginner Tips for Orcs Must Die! Unchained

Regardless of the game, we all love the chance to squish some Orcs. Whether it’s WarCraft, Elder Scrolls, Lord of the Rings, or any other fantasy game, there is something compelling about destroying the warring race of tusked barbarians who always want to crush you into a paste. Orcs Must Die! Unchained is the third installment in the medieval tower defense series, and it is loads of fun (check out our review for more details), with a colorful cast of heroes, simple controls, and fantastic graphics. However, jumping into a game like this without any experience – even if you complete the tutorials – can be a challenge. The game can be unforgiving if you aren’t prepared, and that’s why we have put together five beginner tips to get you well on your way to fending off the horde.

5. Learn Your Traps and Your Environment

In the early stages of the game you will only encounter the most basic of traps, but as you progress, more and more will become available to you. It is important to learn your traps and figure out their strengths: floor spikes are one of your strongest forms of defense, but they don’t activate often. Arrow Walls are fantastic at choke points but aren’t enough to hold the enemy at bay on their own. It is key to recognize the strength of your traps and the most important places to put them in conjunction: low ceilings and narrow paths will be the perfect basis for some fantastic combos, but sadly few stages are built in such an ideal way. You’ll need to focus on concentrated areas to deal the highest amount of damage.

Once you get the hang of how to place traps, you’ll find a few key strategies you love to do. This is great, but even the greatest trap combination will still manage to let a few enemies slip through. It is vitally important – like in any tower defense game – to upgrade your traps. While Tier 1 traps will mostly help you get by in the early waves, by the time you hit a boss wave you’ll be lucky if you dent their armor. Upgrades need to be discovered in chests and purchased with the in-game currency. I suggest trying to get your floor spikes up the fastest as they will be your go-to for damage and should ideally be littering the floor. In between matches, you should always look to see what can be upgraded, as trying to take down the horde with only basic traps will be a significant pain in the rear. 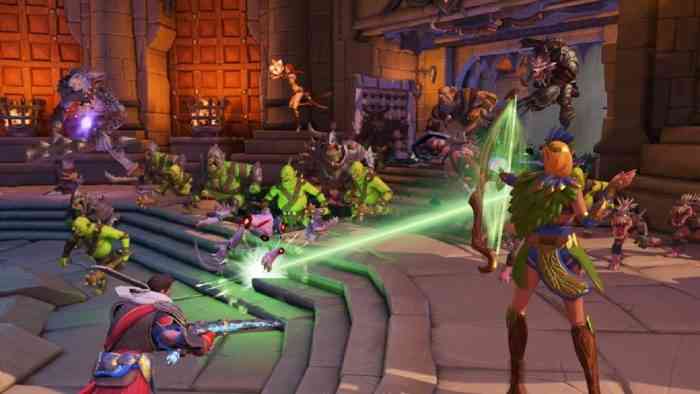 So by this point, you’ve picked up the idea of high damage choke points, upgraded some traps, but the enemy is still barreling down at you full speed. This is where the experience of tower defense comes in: the maze. One of the tutorial missions gives you the basic idea of building a maze, but it’s also important to remember that each stage has a vastly different layout. Barriers will be crucial to herding the horde, but they can also be incredibly expensive. Wait for a few waves before you dump your resources into barriers, and if need be, drop a few tar pits early on to slow them down and then sell them later. Forcing the Orcs to cover as much ground as possible is crucial as it gives you more time to hack away at them. This will take some serious trial and error, mostly involving watching your opponent and seeing how they react to barriers, as some enemies can simply walk over them. Practice makes perfect in creating your death maze.